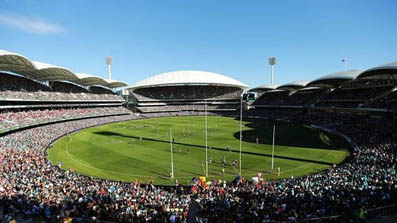 The first AFL season at the new Adelaide Oval has made history, breaking all attendance records with 1,067,132 attending 23 games – a 60% increase on AFL attendances in Adelaide in 2013.

With more than 400,000 extra fans attending AFL games in Adelaide this season, South Australian Transport and Infrastructure Minister Stephen Mulligan stated “last year 665,808 footy fans saw 22 home and away games with an average crowd of 30,264 (at AAMI Stadium/Football Park); the average crowd at Adelaide Oval this year is 46,397.”

This year also saw the record broken for the highest attendance at an AFL game in South Australia with 52,505 attending Port Adelaide v Carlton, bettering the previous high of 51,140 for Adelaide v Port Adelaide in 2003.

Minister Mullighan said the economic return from the oval was similarly impressive, adding “crucially, as well as being a hit with players, local and interstate fans and the media, the redevelopment of the Oval has provided stunning returns for the economy and vibrancy of the city.

“There has been a 78% increase in tickets purchased by interstate visitors this year, not including the more than 7,000 Richmond fans estimated to have travelled to Sunday’s final.

“As highlighted by Premier Jay Weatherill, economic reports show bringing footy to the city has generated around $138 million in revenue in the CBD, and created 465 jobs.

“This includes more than $77 million in new revenue directly resulting from football’s return.

“These results have exceeded all expectations."

Minister Mulligan also reported that a record number of fans chose to take advantage of public transport to AFL games this season with more than 1.1 million trips taken across the network.

Thanking for embracing Adelaide Oval Express services to attend AFL games, he added "on average, around 52% – or 550,000 fans – of the record-breaking crowd this year caught public transport to Adelaide oval– a dramatic increase from the roughly 20% - or around 133,000 fans – that caught buses to Football Park in previous years.”