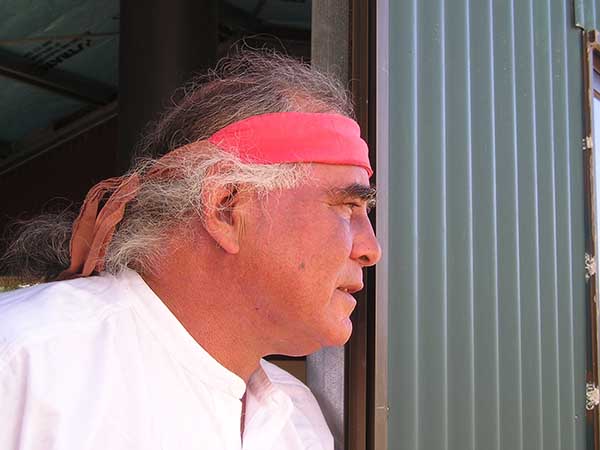 Live Performance Australia (LPA) has today announced that one of Australia’s most celebrated musicians and singer songwriters Kev Carmody will be the recipient of the 2019 JC Williamson Award. Carmody will be honoured at the 19th Annual Helpmann Awards in Melbourne on Monday 15th July.

The 2019 JC Williamson Award is the foremost honour that the Australian live entertainment industry can bestow. In awarding the 2019 JC Williamson Award, LPA recognises an individual who has made an outstanding contribution to the Australian live entertainment and performing arts industry and shaped the future of our industry for the better.

Announcing the Awad, LPA Chief Executive Evelyn Richardson stated "we are very proud to be presenting the 2019 JC Williamson Award to the legendary Kev Carmody in recognition of his outstanding contribution to the live performance industry and Australian society and his profound influence on several generations of artists and musicians."

Carmody is one of Australia’s pre-eminent wordsmiths whose politically charged, and socially aware lyrics have cemented him as one of our country’s contemporary voices. Of Aboriginal and Irish heritage, both cultures famous for oral histories in song, Carmody was born to be a story-teller. His compositions include ‘From Little Things Big Things Grow’ with Paul Kelly which is based on the story of The Gurindji Strike and Vincent Lingiari in their struggle for indigenous land rights and reconciliation.

Acknowledging his announcement as the 2019 recipient of the Award, Carmody stated "the artistic and creative prestige that the JC Williamson Award bestows upon me, in this case, is an acknowledgement of Our Ancient Indigenous oral musical and storytelling history. As this year's recipient I accept the award on behalf of this cultural recognition, with humility and gratitude ... thank you,.".

Born in 1946, Carmody grew up on a cattle station in the Darling Downs area of south eastern Queensland. His family were drovers and stockmen who lived largely off the land, growing vegetables near the house and hunting. Around the stockmen’s fire he learned his love for storytelling and music. When he was ten, Carmody and his brother were taken from their parents and sent to a ‘Christian’ school. Without completing his senior school years he returned to hard physical rural work for the next seventeen years.

His turning point came, when at the age of 33, Carmody enrolled in the Darling Downs Institute of Advanced Education to study geography, history and music, progressing through to PhD studies at Queensland University. To make him more comfortable with the oral side of his studies, his lecturers allowed him to bring along his guitar to his first tutorial to allow him time to learn to write and construct an academic essay. Carmody had never been into a library before and had never read a book.

While at university Carmody also took the opportunity to acquaint himself with experimental music pioneers John Cage and Karlheinz Stockhausen. Although his music would reflect his own Murri culture, expressed in the social history song traditions of Woody Guthrie and Huddie Ledbetter, Carmody was never going to be an ordinary or traditional singer-songwriter. There’s been musical imagination as well as lyrical passion.

He released his first album ‘Pillars Of Society’ in December 1987. Rolling Stone magazine described the album as “The best album ever released by an Aboriginal musician and arguably the best protest album ever made in Australia”. Four studio albums followed: ‘Eulogy (For A Black Person)’ (November 1990), ‘Bloodlines’ (July 1993), ‘Images And Illusions’ (September 1995) and ‘Mirrors’ (May 2004).

The Australian live theatre and entertainment industry will come together for two remarkable nights at Arts Centre Melbourne on Sunday 14th July and Monday 15th July for the 2019 Helpmann Awards.

The full list of 2019 Helpmann Awards Nominees will be announced on Tuesday 11th June.

For further information go to www.helpmannawards.com.au