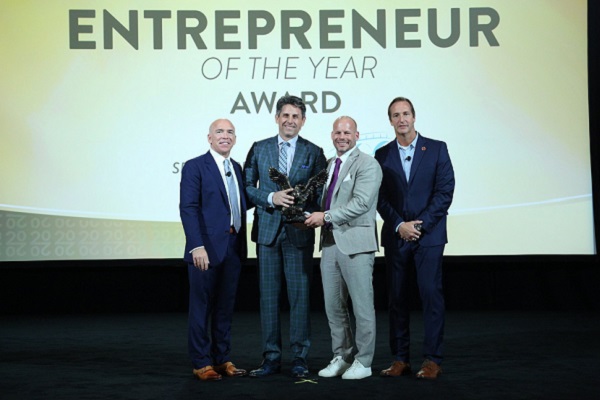 Chief Executive, Chuck Runyon and President Dave Mortensen, co-founders of Self Esteem Brands - parent company to Anytime Fitness, Waxing the City, Basecamp Fitness, and The Bar Method - have been selected by the International Franchise Association (IFA) as the 2019 IFA Entrepreneurs of the Year.

First presented in 1982, The IFA Entrepreneur of the Year Award recognises leaders within the franchise industry who have the vision to see what might be, are willing to take risks that traditionally accompany any new endeavour, and possess the management skills to create a successful business enterprise through franchising.

Accepting the award, Runyon stated "we accept and dedicate this award to every franchise owner who's taken that leap of courage to own their own business.”

Mortensen added "this award was only made possible by the hard work and trust of 4,500+ franchise locations that brought our vision for the brands to life.”

The duo started their entrepreneurial journey with a vision to revolutionise the fitness industry with an alternative to ‘big-box gym’s and developed the Anytime Fitness business model - a 24/7 gym open 365 days of the year with state-of-the-art equipment and top-line trainers and staff. After opening the first club in 2002, they were confident that their concept had the potential to become something extraordinary.

Today, the brand has grown to nearly 5,000 locations, making history as the first franchise on all seven continents, in nearly 40 countries, serving more than 4,000,000 members. Now entering a period of brand evolution, shifting from its pioneering convenience model to a more personalized coaching approach, the multi-billion-dollar franchise continues to stake its claim as a worldwide leader while expanding its global footprint.

Building on this success, Runyon and Mortensen established Self Esteem Brands with the vision of improving the self-esteem of the world at its core. The portfolio of brands has grown to include Waxing the City, Basecamp Fitness, and The Bar Method. Waxing the City, the premier facial and body waxing franchise, was recently ranked in Entrepreneur magazine's Franchise 500® and plays a dominate role in the beauty industry boasting 118 locations. 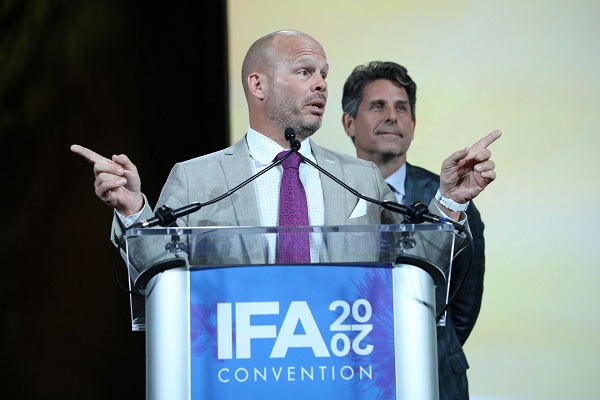 As an emerging brand, Basecamp Fitness seeks to carve out a niche in the growing boutique fitness industry, offering a unique, fun, and fast-paced workout in just 35-minutes - catering to the busy lifestyle of today's society. Self Esteem Brands' most recent acquisition, The Bar Method, boasts over 100 locations across North America and aims to empower women to be the best version of themselves through efficient, full-body workouts that build inner and outer strength, grace, and pose.

Making the award, IFA President and Chief Executive, Robert Cresanti stated "Dave and Chuck are well-deserving of this honour.

"Their leadership of Anytime Fitness and the entire Self Esteem Brands family led to pioneering new concepts in fitness, expanded opportunities for their franchisees, and a healthier America. IFA is proud to honour them as the 2020 Entrepreneurs of the Year."

Central to Runyon and Mortensen's leadership philosophy is the four P's: People, Purpose, Profit, and Play. The duo claims the secret to their success has been less of a focus on ROI and more on ROEI - return on emotional investment. ROI has always been the holy grail in business - rightfully so as a company needs a healthy ROI to grow and innovate.

However, according to Runyon and Mortensen, it is personal growth that ultimately leads to business growth. They believe it is a leader's job to create a company that builds its people, so in turn they build the business - their passion, energy, and commitment contribute to a strong working environment.

Runyon added “as we've grown and evolved over the years, it's become clear our assets are in our people who care deeply about their members, their employees, and their businesses," said Runyon. "They are the heart of this brand and it's their caring and connecting with people, and dedication to our business, that will form the foundation for a strong future. We thank our entire network - as they are the key ingredient behind being honoured with this prestigious award."

The formal presentation took place on last month during the IFA's annual Convention at the Orlando World Center Marriott in the US state of Florida.