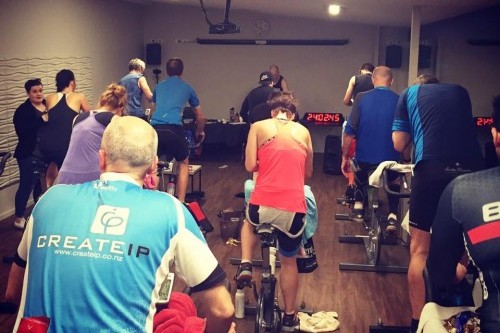 Following a marathon effort last August, 14 local Christchurch spin cyclists have had their 26 hours, 4 minutes and 24 seconds record attempt ratified by the Guinness World Records and have been awarded a Guinness World Record for the World's longest Static Cycling Class.

The record-making spin cycle class was conducted by Anytime Fitness spin class instructor Andy Beale, and while the record attempt gave the group a goal to spin for, the real motivation came in helping raise much-needed funds for Maddie and her family.

Anytime Fitness Cashmere Club Manager, Matty Lovell advised it is "going to be great to have that record on our wall, but it is more about helping people and being meaningful members of both our local and global community."

For the Cashmere team, charitable efforts are nothing new as Lovell made headlines late last year with his ‘Earth to India’ Rickshaw journey to help underprivileged children in Sri Lanka and India.

Lovell’s personal motivation for helping others was sharpened following his involvement in the Christchurch earthquake where he was involved in the rescue efforts of people from the collapsed PGC building.