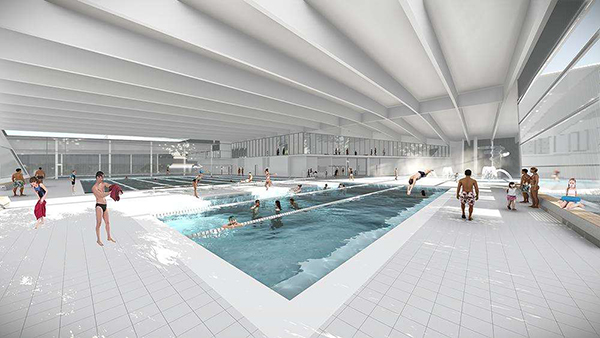 City of Greater Geelong Council is set to launch a new pitch to obtain the required funding for a major redevelopment of the Waterworld site in the Geelong suburb of Norlane into a state-of-the-art wellness and preventative health precinct.

Council will also propose to re-name the existing working title of ‘Northern ARC’ to the ‘Northern Aquatic and Community Hub’. The proposed new working title is aimed at making the deliverables of the project as clear as possible.

At tonight’s meeting (Monday, 21st September), the Council will vote on a proposal to allocate an extra $800,000 for the final design stage to make the project ‘shovel ready’.

There is no change in the direction of the project itself or the plans created to date.

A report to be presented to Council on Monday night notes that government investment aimed at pandemic recovery stimulus has so far looked to shovel ready projects that can start quickly.

The proposed Council funding aims to remove every barrier to the project being positioned as a top priority for state and federal investment. It would complete the last of four design stages, meaning the project could be put out for construction tender immediately if it were to be fully funded.

Geelong Mayor Stephanie Asher advises “this redevelopment has been a priority for the Council throughout our term and we’ve said all along that we won’t give up until it’s built. The project is more important now than ever given it would both immediately stimulate Geelong’s economy, and significantly boost the community’s health and wellbeing. The proposal to be discussed on Monday night is about moving the project into shovel ready status to remove all barriers to federal and state funding.”

The redevelopment would deliver a state-of-the-art aquatic and community facility for the Geelong region in the northern suburbs, featuring:

The project has been costed at $61.6 million, with the City of Greater Geelong committing $20.6 million - its largest ever social infrastructure contribution. The Council has already invested just under $1.4 million to progress through the first three design stages - with the concepts to date, including the below fly-through video.

The City is seeking matching funding from the state and federal governments, with the COVID-19 pandemic adding further urgency to an already vitally important project for Geelong.

Independent modelling has forecast the proposed facility would attract 600,000 visits per year – double that of the existing Waterworld – and deliver $111 million in preventative health benefits during its first decade in operation.

Councillor Anthony Aitken, Windermere Ward added “this critical project for Geelong and the north has taken on even greater urgency in light of the COVID-19 pandemic. It’s Council’s number one community stimulus infrastructure project. Access to a state-of-the-art facility would encourage more people to exercise, benefitting the community’s overall physical health.

“The new community hall would be the best of its type in Geelong, offering a place for group activities and events of many different kinds – in turn creating social connections and improved mental health. Its importance as a regional facility will only increase as Geelong’s population grows – given it will eventually service large new residential areas to the city’s north and west.”

Image and video courtesy of City of Greater Geelong