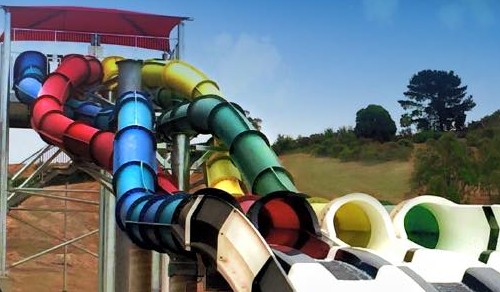 A new bridge has also been built to connect Funfields' main waterpark to the new Kraken Racer slide.

The $3.5 million investment further improves the attraction which has expanded considerably in recent years, adding:

The park has also added to its sheltered areas with the building of the Grand Pavillion, a 350 metre² shelter and completed extensive pirate theming out on the Pirate Ship, while Funfield's mini golf was completely refurbished and renamed Treasure Cove.

Explaining the expansion, Funfields Park Manager John Verga states "last season was a breakout season for us where attendance increased over 30%.

"Planning for the 2015/16 season we made several important decisions which included a complete revamp of our branding.

"We really thought that the park had now outgrown our logo and so a new logo was designed to take us into the next phase of the business.

"We also published a new look website which has been nominated for an award by CSS Design Awards.

"The inclusion of the Kraken Racer was a no brainer as after the record crowds of last season we sought a ride with a high turnover of patrons.

"One of the things to come out of our patron surveys the previous season was that our patrons were asking for more kiddie rides and so it was decided to install the two Zamperla rides.

From humble beginnings, 30 years ago Funfields has developed into a host of quality attractions featuring a tantalising mix of both wet and dry rides to guarantee outdoor family fun.

Funfields is located in Whittlesea, 40 kilometres north of Melbourne's CBD.

For more information go to www.funfields.com.au

Images (from top): the new Kraken Racer water slide, the ride under construction, promotion for the new ride and Funfields' new logo.