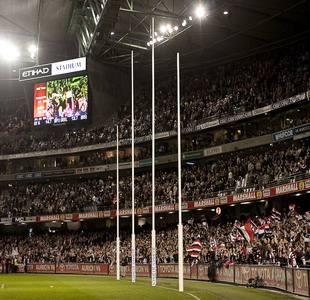 The artificial turf bordering the Etihad Stadium surface has been blamed for the season ending knee injury to Brisbane Lions AFL star Michael Close after on the boundary line between the playing surface and the artificial turf.

Close requires a full knee reconstruction after suffering an anterior cruciate injury after he appeared to slide towards the boundary line during the Lions game against North Melbourne on Sunday 12th April. Close’s heel appeared to catch on the artificial turf.

Because of heavy traffic which caused problems with the natural turf, Etihad Stadium laid extra artificial turf both behind the stadium goals and at the interchange gates.

Both the MCG and the Gabba have artificial turf, but at neither ground does it extend as wide as the Etihad extensions.

As a result of the injury, the Lions have been reported as demanding $100,000 in compensation from Etihad Stadium and the AFL for the injury, although no official correspondence has been received by the management of Etihad Stadium on the matter.

In a subsequent interview with Melbourne newspaper The Age, Sergeant emphasised the quality of Etihad Stadium’s playing surface and surrounds, stating “it's not as though the artificial turf you put in there is out of some DIY centre - it's professional, artificial sports turf that's designed for a purpose."

Sergeant also commented on the intense scrutiny that the venue is under, from its playing surface, the opening of the roof and the financial arrangements for tenant clubs.

Having managed London’s Wembley Stadium and Millennium Stadium in Cardiff in his 34-year-long stadium management career, Sergeant says the media interest in AFL in Melbourne outstrips anything he experienced in other venues and codes, and often leaves him thinking, "gee, I'm surprised that got a run ..."

He added "you never know what's around the corner - the intense coverage around a small issue, and we've experienced a bit of that. 'Oh, there's a divot there', and it's on the front page of the paper."