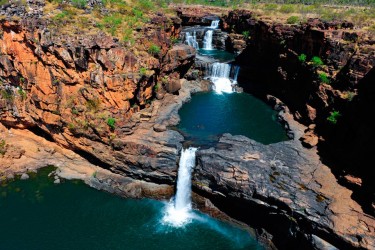 After extensive negotiations, a 45-year agreement that gave the miners rights on the Mitchell Plateau has been cancelled, paving the way for the area to be included in a new national park.

The Western Australian Government wants to establish Australia’s largest national park in the area, which is internationally renowned for its rich flora and fauna, the Mitchell Falls and 40,000-year-old Indigenous rock art.

More than 175,000 hectares of the Mitchell Plateau will become part of the Kimberley National Park, which will span two million hectares – an area larger than Kakadu.

The national park plan has bipartisan support, with the Western Australian opposition outlining a similar proposal during its 2013 election campaign.

Tourism Council Western Australia (TCWA) Chief Executive Evan Hall has welcomed the creation of the Kimberley National park anticipating that it will be a major tourism drawcard.

Hall explained “’Western Australia is one of the world’s great eco-tourism destinations (and) as Australia’s largest National Park, the Kimberley National Park will grab the attention of a tourist looking for the ultimate eco-tourism and indigenous tourism experiences.

“The tourism industry is committed to maintaining the highest standards while protecting, preserving and presenting this untouched environment.”

TCWA are this week launching the WA Marine Tour Operators Best Practice Standards for the Kimberley.

Operators following the standards will be accredited as high quality Marine Tourism businesses.

The standards and accreditation guidelines were developed with the Department of Fisheries under the Kimberley Science & Conservation Strategy.

Hall concluded “tTourism operators in the combined Kimberly National and Marine Parks will bring tourists and jobs to these regional areas while protecting a very special place on earth.”

In a speech supporting the forestry industry in May last year, Australian Prime Minister Tony Abbott has said he did not support the creation of any more national parks in Australia.