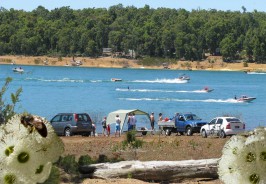 Tourism and camping in the south-west of Western Australia will benefit from $3.5million in funding for the redevelopment of popular campgrounds at Logue Brook Dam, Leeuwin-Naturaliste National Park and Black Point campground near Pemberton.

The upgrades, made possible by the Western Government’s Royalties for Regions program, are among six projects that will benefit from $21.05 million under the Parks for People initiative.

At Logue Brook Dam, $1.28 million is being invested to build on works already under way and deliver at least 110 new camp sites for 300 campers by mid-2015. The new campground will also include gas barbecue shelters, six toilet blocks and 3.4 kilometres of internal roads. Water skiers will also see improvements to facilities including the boat ramp, trailer parking and toilets.

At Conto campground in Leeuwin-Naturalise National Park, $650,000 is being invested. By mid-2015 this will result in at least 30 new camp sites for 80 campers, a camp kitchen and toilets. Trails and roads will also be improved at the popular caving and fishing destination.

“These facilities will enable WA to attract new visitors without impacting on the environmental values of our precious parks.

“National Parks and camping grounds are a great way to attract new visitors to experience WA’s magnificent regions within a budget.”

This weekend the Western Australian Government has also waived entry fees at 30 parks from Saturday 31st May to Monday 2nd June, with more than 18,000 people expected to take up offer over the WA Day long weekend.

Explaining the waiving of fees, Minister Jacob added “we hope free entry weekend will attract families to our magnificent parks and encourage them to use the long weekend to explore and enjoy nature.

“It is also a wonderful opportunity for those people who have never visited our parks to plan a trip and experience our unique and beautiful landscapes.

“There is something to suit every age and activity level, from watching the koalas over a picnic at Yanchep National Park, to paddling the Avon’s white waters in Walyunga National Park in Mundaring, or ‘going bush’ in the wilderness of King Leopold Ranges Conservation Park in the Kimberley.

“Through our Parks for People initiative, over the next four years, we are investing in about 450 new camp and caravan sites, along with new and improved visitor facilities and services, such as roads and lookouts.”

Click here to find out more about Western Australia’s parks.

Click here to find out more about Western Australia’s campgrounds.