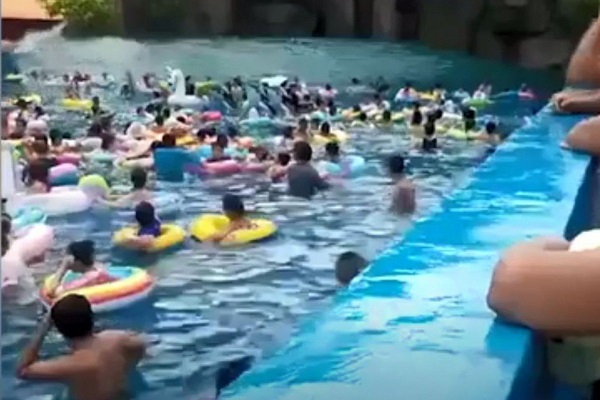 Video footage has captured the moment a wave machine malfunctioned at a waterpark in northern China, transforming the pool's gentle swell into what some media have call a “tsunami-like wave” that injured over 40 people.

Hundreds of people enjoying some respite from the sweltering summer heat at the Yulong Shuiyun Water Park earlier this week frantically scrambled to the pool's edge as the wave ploughed through a sea of swimmers.

Some were flipped upside down in their floating rings while others were launched out of the pool.

Screams echoed around the park, with footage showing one woman on the ground covered in blood.

One woman appeared unconcerned by any possible risk, turning her back to the wave and taking a selfie as the large swell raced towards her.

Located in the Yulong Bay Scenic Area, a popular summer tourist resort in the north-eastern Jilin Province close to the border with North Korea.

While some Weibo users speculated an intoxicated operator was to blame, a statement on the local government's official Weibo account said the freak wave was caused by an electrical fault.

According to the statement, 44 people were injured, with seven still in hospital being treated for fractured ribs, concussion and other injuries.

The wave pool has been shut by authorities for inspection.

Image and video shows the wave pool malfunction at the Yulong Shuiyun Water Park this week.