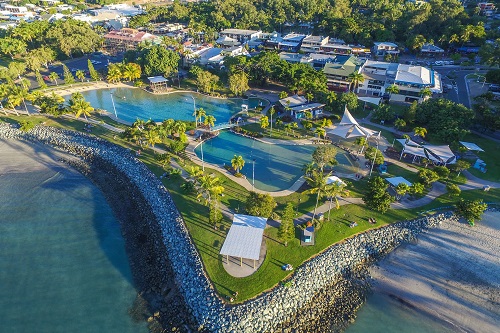 Two overseas tourists - a father and son - have drowned while swimming at the Airlie Beach lagoon in the Whitsundays.

The pair, believed to be from China, were, according to Queensland Police, underwater for six minutes before they were noticed and an alarm was raised.

Emergency services were called to the popular attraction just before 4pm on Sunday.

A Queensland Ambulance Service spokesman said paramedics were called to treat a five-year-old and a 30-year-old male, who were in a critical condition and had gone into cardiac arrest.

They had been pulled from the water and were on the beach when paramedics arrived and tried to resuscitate them. Rushed to Proserpine Hospital in a critical condition neither could be saved.

Queensland Police Inspector Steve O'Connell said CCTV of the pool showed the man, who apparently couldn't swim, entering the pool with his son at the shallow end.

"He's tried to raise the alarm but it wasn't sufficient for anyone that was around him to notice the distress that they were in or that they were sinking to the bottom.

"Unfortunately despite it being a crowded situation on a hot, busy day in the lagoon, no-one has noticed the circumstances unfolding until some, approximately, six minutes after they went under."

Inspector O'Connell said when someone swimming noticed the man at the bottom of the pool the alarm was raised and lifeguards pulled him from the water.

He added that the boy was pulled from the water a few minutes later and there was a "frantic" effort to resuscitate them.

Inspector O'Connell added that the man's wife was at the pool at the time, advising “after the father and son have gone into the water, mum has left the lagoon area briefly to get a drink. When she's returned the tragedy is unfolding before her eyes.”

He said the woman was "exceptionally distraught" and was being helped by the Chinese embassy.

Inspector O'Connell said it was a tragic set of circumstances, concluding “that you can drown in a crowded public area like that, but the CCTV clearly shows it was not something that anyone around them could pick up on.”

The Airlie Beach lagoon is patrolled by lifeguards and is a popular destination for locals and visitors.

A report will now be prepared for the Queensland Coroner.