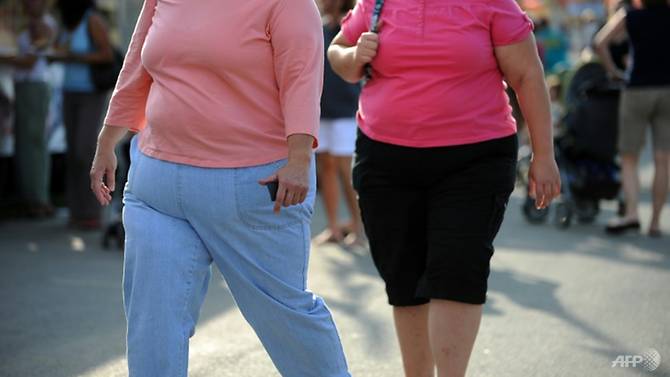 Deakin University health economists have launched the most comprehensive analysis of Australia’s policy arsenal in the fight against obesity. The analysis from Deakin Health Economics, within the Institute for Health Transformation, evaluated the economic credentials of a range of policies to discern the most cost-effective, affordable and implementable options.

The analysis is contained in a new report, Assessing Cost-Effectiveness of Obesity Prevention Policies in Australia (ACE-Obesity Policy). It ranked a uniform volumetric tax on alcohol - where all alcohol would be taxed at 84 cents per standard drink - as the most cost-effective policy, followed by a tax on sugary drinks, and a ban on junk food advertising to kids.

The report’s lead author, Senior Research Fellow Jaithri Ananthapavan, said all of the 16 interventions assessed, many backed by leading public health groups, were found to offer good value for money. 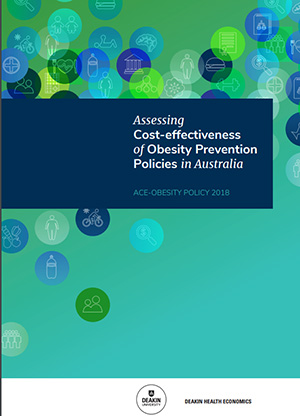 Ananthapavan said the release of the ACE-Obesity Policy report was timely, with the Council of Australian Governments (COAG) last month indicating they planned to work towards a national obesity strategy.

“The Senate Select Committee into the Obesity Epidemic in Australia also handed down its findings last week, with key recommendations including a tax on sugary drinks and TV junk food advertising bans, which both rank in the top three of our list of cost-effective interventions,” Ananthapavan said.

“If the government wants to make obesity prevention a key health priority, this report provides a great road map towards that goal. These interventions are spread across a range of settings and sectors and include program-based polices as well as regulations, allowing governments to prioritise implementation according to their policy preferences.”

“Alcohol is high in calories, with a pint of beer almost on par with a chocolate bar, so consumption can have a big impact on daily energy intake,” Associate Professor Sacks said.

“Currently different types of alcohol are all taxed differently, but under a uniform volumetric tax all drinks would be taxed based on alcohol content, meaning a significant price increase for some products.

“Previous work has already shown this kind of alcohol tax could have a positive impact on wider health issues, including injury prevention, the justice system and road accidents. But our economic modelling is the first to show such a tax could have a significant positive effect on population weight too.” 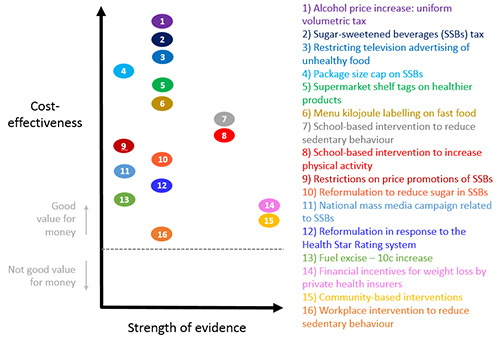 Ananthapavan said the report recognised that the government and private sector had to take into account a number of considerations when it came to adopting new policies, beyond just cost-effectiveness, including their popularity with the public.

She added “our report looks at other important factors, such as ensuring policies don’t unfairly harm vulnerable population groups, the strength of evidence for an intervention, its acceptability by the public, the feasibility of implementing it, and how sustainable it would be in the long-term.

“Taxation-based policies are highly cost-effective. However we know that they can be unpopular, so we also looked at 13 non-taxation based policies in our report and found they all represented good value for money too.

Ananthapavan said Australia’s alarming overweight and obesity rates – 63% of adults and 27% of children – would only be addressed through implementation of multiple interventions in tandem, concluding “Australia’s current obesity epidemic has serious negative health and economic consequences. It costs society more than $12 billion each year in medical costs and lost productivity, which will only be addressed through a comprehensive societal response.

“Despite the growing burden of preventable diseases, the health budget for prevention efforts is only 1.34% of Australia’s health expenditure. This is considerably less than comparable countries like Canada, the UK and New Zealand.

“Within this limited budget, governments need to prioritise which interventions to fund. It’s therefore critical we build reliable evidence on the costs and benefits of various policy options.”

ACE-Obesity Policy was completed as part of a National Health and Medical Research Council Centre of Research Excellence grant in Obesity Policy and Food Systems.

For further information on the report Assessing Cost-Effectiveness of Obesity Prevention Policies in Australia go to www.aceobesitypolicy.com.au/wp-content/uploads/2018/12/ACE-Obesity-Report_Final.pdf