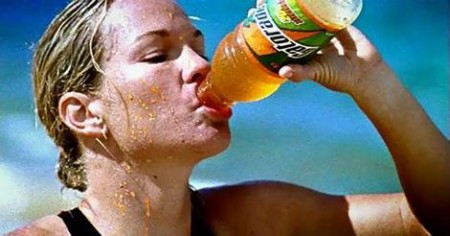 South African hydration expert Professor Tim Noakes has slammed the likes of Gatorade and the role of sports drinks in setting the agenda on fluid intake during exercise, saying Australians are more likely to do damage by over consumption of fluids rather than suffering any ill-effects of dehydration.

Professor Noakes suggested that exercising Australians may be drinking too much while addressing over 800 Exercise Physiologists from across Australia at Exercise & Sports Science Australia's (ESSA) 'Research to Practice' Conference at Jupiters Hotel & Casino on Friday.

In his keynote address Professor Noakes shared his beliefs that the 'science' of drinking during exercise was commercially manipulated with some fatal consequences and, predictably, that these guidelines were associated with a 10-fold increase in annual turnover for Gatorade from $217 million in 1985 to $2.69 billion, eighteen years later.

Professor Noakes explained "while the likes of Gatorade have us believe we need to be drinking 1.2 litres per hour during exercise there is no clinical research that proves this, in fact over-consumption of fluids could be detrimental.

"These claims have had athletes across the world believe that drinking any less would negatively impact on performance which is completely unfounded. Some of the most successful athletes in the world are the ones who drink the least. The dreaded ‘dehydration' disease had to be created only to produce a commercial windfall that would result from this radical change in the drinking behaviour of athletes."

Professor Noakes shared his concerns that the hype created around the dehydration condition has resulted in people drinking too much during exercise which in fact negatively impacts on performance due to the excess weight carried by the athlete and more seriously, the potentially fatal complication, Exercise-Associated Hyponatraemic Encephalopathy (EAHE).

In 1965 Dr Robert Cade developed the world's first sports drink at the University of Florida. Dr Cade believed that only by drinking during exercise could athletes optimise their performances and protect themselves from heat stroke.

However, Professor Noakes stated "this despite the absence of any evidence, then as now, that dehydration plays any role in the development of heat illness during exercise.

"Then in 1982 and 1984 scientists from the United States Army Research Institute for Environmental Medicine (USARIEM) proposed the novel hypothesis that water should be considered a tactical weapon in battle. Thus soldiers who drank at very high rates would be prevented from developing "heat illness" and would have a tactical advantage as surely as if they had superior weaponry."

"Despite the absolute absence of any evidence to support this attractive hypothesis, within a short time this new dogma was accepted by USARIEM, the US Military and a cadre of industry-supported scientists advising important international thought-leaders such as the American College of Sports Medicine (ACSM) and the International Olympic Committee (IOC)."

Several Position Statements on Thermal Injuries during Distance Running were developed by the ACSM in the years that followed proposing that athletes should drink at high rates during exercise in order to optimise their performance and to reduce their risk of developing "heat illness".

Professor Noakes continued "the 1996 ACSM Position Stands went further, proposing that athletes should "drink as much as tolerable" so that they did not lose any weight during exercise. Those Position Stands and their more recently updated modification in 2007 represent an interesting collaboration of the ACSM, funded since 1992 by the US sports drink industry (Gatorade), USARIEM and the US Military – perhaps the single largest user of the sports drink, Gatorade - since all the senior authors of the those four Position Stands were either trained at, or are currently employed by USARIEM or the US Army.

"This is not a conspiracy theory, just following the facts and differentiating between guidelines developed for commercial gain and those clinically proven," said Professor Noakes.

ESSA Executive Officer Anita Hobson-Powell explained that Professor Noakes received a fantastic response at the conference and gave those attending food for thought when they returned to their practices across Australia.

Hobson-Powell stated "we are delighted that Professor Noakes as well as a number of the most highly regarded international speakers could join us at our conference to raise relevant and thought-provoking issues.

"Exercise and sports science practitioners operate in an environment that is constantly evolving and this conference provides an opportunity to keep abreast of the latest research, technical information, products and equipment."

For more information about ESSA and the 'Research to Practice' Conference please visit www.essa.org.au.