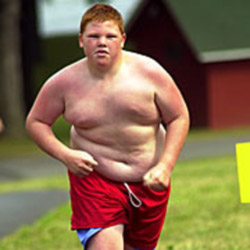 One in four Australian children are either overweight or obese, according to the Australian Bureau of Statisticsâ quarterly social trends figures.

The report also showed that childhood obesity was continuing to rise with the ratio of obese boys doubled to 10% during this time, while the rate of overweight older girls was up eight percentage points to 20%.

Despite more children falling into unhealthy weight ranges, there has been a surge in the numbers taking up sport.

Participation rates in informal sporting activities, like bike riding or rollerblading, were at similar levels, occupying kids in that age bracket for an average of six hours per fortnight.

However, an estimated 37% of children did not take part in sports at all.

Among older children, 77% played sport or did recreational exercise in the two weeks prior to being surveyed.

Sedentary pursuits such as watching television and playing computer games are popular with children as well.

The average time spent on these two activities in 2006 was two hours per day, the maximum recommended amount.

The report warned that people who suffer weight problems during childhood were more likely to have the same problems in their adult lives.

The ABS' latest Culture and Recreation News can be viewed at www.abs.gov.au/ausstats/abs@.nsf/mf/4147.4.55.001?OpenDocument