The City of Greater Geelong in Victoria and Campbelltown City Council in western metropolitan Sydney are using collaborative research, pilot projects and innovative measures to fight the impacts of the urban heat island effect and cool their communities.

Caused by the clearance of vegetation and its replacement with structures made of concrete, steel and asphalt in urban areas, ‘heat islands’ occur when heat is unable to escape and is trapped for longer periods. This leads to built-up urban areas remaining warmer throughout the day when compared with rural areas.

The phenomena can have a huge impact on wildlife and urban vegetation and can be dangerous and costly, especially during periods of extreme heat. Vulnerable members of the community are at risk from heatstroke and dehydration while energy prices during this period also tend to increase as demand from the grid skyrockets, impacting the running costs of council facilities and infrastructure.

As more people turn to air conditioning for relief from the heat and begin using electricity, the strain on the network can lead to blackouts. In January 2018, more than 50,000 homes in Melbourne were left without electricity after prolonged high temperatures and humidity led to grid failure.

The urban heat island effect affects more than just Australia’s CBDs. In Western Sydney in particular, the harbour sea breeze often reaches the region later in the day or is blocked by increased development.

Williamson advised “in the 2017 summer, Campbelltown experienced 19 more days of temperatures hotter than 35 degrees and eight more days of over 40-degree heat when compared with the eastern suburbs.

“With the population of the Macarthur region set to double to more than 800,000 residents over the next 20 years, the Council needs to ensure its infrastructure and facilities are resilient to withstand these extreme heat events and appropriately support its community.”

In July 2018, Sydney and its 33 metropolitan councils launched its first ever metropolitan-scale resilience strategy.

The strategy identified Sydney as highly vulnerable to extreme weather effects, with extreme heat considered the city’s biggest potential shock. It outlined actions that aim to cool the suburbs of Sydney by using data sensing, materials science, built environment planning and performance monitoring to develop a ‘cool score’ for new and existing suburbs.

Campbelltown City Council is undertaking a number of initiatives to develop an evidence base to inform decision-making, policy development and targets. One such partnership is with the Cooperative Research Centre for Low Carbon Living which aims to develop an urban heat island mitigation and support tool.

The tool compiles evidence from existing and emerging studies to inform policies related to cooling streetscapes, precincts and cities. Stakeholders will be able to virtually interact with a precinct and examine how different cooling interventions such as tree planting and lighter-coloured materials (on roofs and pavements) could benefit an area.

Two sites in the City of Campbelltown have been included in the wider study, with heat images capturing significantly different temperatures between darker and lighter coloured roofs, a significant temperature difference between healthy and dead grass and a positive cooling effect from healthy trees.

Williamson advised “a simple change such as changing the colour of a roof can lead to a decrease in temperature by 1.7 degrees. This model will allow us to inform better development standards across our community.”

To further understand the effects of heat on the community, Campbelltown City Council has partnered with the University of New South Wales (UNSW) to provide 100 residents with information and equipment to monitor three microclimates: urban areas near housing, green open spaces and on surface materials such as car parks.

The Council has also joined the UNSW, University of Wollongong and NSW Office of Environment and Heritage to collect temperature information on residents who live in social housing without access to air conditioning.

Williamson added “the project collects temperature information across the year to help identify how hot residents’ homes were, how it was affecting them and the ways they were keeping cool.

“In some households, people would go to the shops for heat relief. Others moved between floors over the course of the year, spending summer on the bottom floor and winter on the top floor.”

Because council facilities are an important part of handling the heat, the council aims to implement a range of measures to ensure its public facilities can provide a comfortable space for its vulnerable community members.

Building a detailed business case is considered a critical step for the Council, which is why it plans to partner with Western Sydney University to collect localised baseline temperature data across the local government area.

The initiative will include the placement of 110 temporary temperature sensors for a three-month period commencing in December 2018 to collect information at 10-minute intervals.

Data gathered from these sensors will be used to generate detailed day and night time temperature graphs, spatio-temporal variation of thermal regimes, geo-referenced maps of temperature distributions across Campbelltown and provide special attention on heat wave events and their impact.

Williamson says the findings will be reported and presented to the council to assist its decision-making process, stating “what we’re aiming to do is build an evidence base, so we can prioritise where the most vulnerable parts of our community are and ensure they are protected appropriately.

“Collaboration with other metropolitan councils, industry and state government has been vital to ensuring we can improve our community’s resilience to heat events. Discussion and knowledge sharing are an important part of developing initiatives that will have the most impact.” 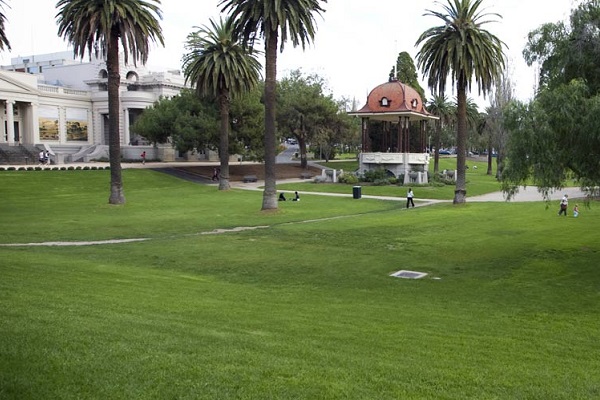 Greening Geelong
The City of Greater Geelong is also preparing to address the impacts of heat on its community. To assist, the council jointly commissioned AECOM and Monash University to provide an executive report that brought together findings from 12 studies and papers.

The report found additional targeted thermal imagery would help to prioritise investment in reducing urban temperatures and the use of heatwave vulnerability map could identify areas most vulnerable to expected elevated temperatures.

Urban development is expected to grow within the Geelong municipality, with the number of private dwellings expected to increase from 101,000 in 2013 to 134,000 in 2031. Through the use of strategic and statutory planning tools, the Geelong has the capacity to influence the location and type of development that occurs.

City of Greater Geelong Director of City Services, Guy Wilson-Browne says that the areas identified as hot spots include wide open streets where there is little shading from buildings or vegetation, as well as built up city areas.

Wilson-Browne advises “Precinct Structure Plans are in place for new developments in Greater Geelong, which have a range of provisions that may reduce urban heat impacts.

“These include objectives, guidelines and requirements related to shading streets and pedestrian spaces through verandas and shade trees, minimising areas of unshaded car park and landscaping to provide shade around buildings.

“The city is working to minimise urban heat island effect through all of its service areas. This includes factoring in urban heat specifications into the design and maintenance of public infrastructure.”

Planting additional trees throughout the municipality is another way the council is reducing the effects of heat, along with water-sensitive urban design methods that retain water to increase evaporation.

Geelong’s Green Spine Project is one development implemented to reduce heat within the city centre. A continuous canopy of trees and series of different alfresco seating and gathering spaces have been placed along the length of Malop Street to improve canopy coverage.

“Initiating a structure monitoring program that uses readily and cheaply available LANDSAT data to further explore the characterises of urban heat for each municipality also allowed us to better inform mitigation efforts.”

The Council has also explored opportunities for a practical retrofit pilot on a council-owned facility using a combination of built form and landscaping approaches.

He concludes “it is important to lead by example to demonstrate the local potential to reduce the urban heat island’s effects.”