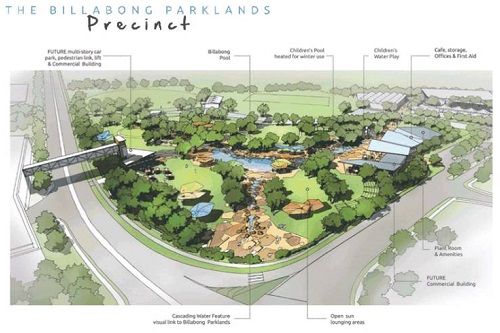 Plans by the Campbelltown City Council in western metropolitan Sydney to develop a new lagoon are moving forward with the recent endorsement of the precinct development.

Planned for Apex Park in the suburb of Bradbury, the Council wants to utilise $15 million of its City Deals funding - provided by the Federal and NSW Governments - on top of $3.75 million of its own funds to develop the ‘billabong precinct’.

Campbelltown Mayor George Brticevic has long campaigned for a lagoon facility in the area, telling local media “the billabong will hit all of the key liveability targets that have been set under the City Deals scheme and will be great for the community.”

Allowing for various approvals and public exhibition periods, he anticipates the billabong will be operational in 2020.

The billabong proposal - available to view in the extraordinary meeting business papers - details an exciting and inviting water park.

The proposal stated “the billabong concept draws inspiration from the Dharawal National Park creating a series of rock pools along a meandering waterway that ultimately culminates in a billabong/lagoon type creation facility.

“Elements along the waterway’s path would be designed to bring landscape and cultural heritage values into the Campbelltown CBD cityscape, providing a place for the community to relax, gather, play, swim and make memories.”

The report said the proposed billabong would complement the existing Gordon Fetterplace Aquatic Centre and “act as an iconic destination feature for Campbelltown”.

The lagoon would address “the absence of any natural water-based opportunity within the CBD precinct” and “the need for unstructured recreation for residents and visitors seeking relief from summer conditions”.