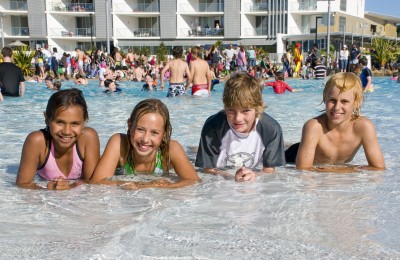 Mackay's popular Bluewater Lagoon generates an estimated $5 million in economic benefits to the Mackay region annually, according to a social and economic study conducted by Mackay Regional Council.

The Council recently conducted a Post Implementation Review of the facility to determine the economic and social benefits of the lagoon as part of its funding agreement under the Australian Government's Regional Partnerships program.

Feedback from over 1,600 survey respondents labelled the lagoon a "functional community facility" which meets the needs of a large cross section of the Mackay community.

Manager Recreation Services Onno Van Es said since its opening in August 2008, this facility has been a resounding success, stating "it attracts almost 400,000 people a year, has created employment opportunities and facilitated development along the riverfront."

The review shows that 85% of the visitors to the lagoon are predominantly local residents, with 5% coming from the Isaac and Whitsunday Regional Council areas.

About 10% of users are visitors to the region or family and friends visiting local residents.

Van Es said the lagoon is a key driver in promoting the region's lifestyle and liveability attractions, adding "the family friendly nature makes it a big winner with a large portion of the region's population and enhances our reputation as an attractive place to live, work and play."

Respondents have suggested a number of improvements including more shade and seating as well as earlier opening times.

Van Es concluded that the review reinforced the economic importance of the Bluewater Lagoon and its long term impact on the local community.