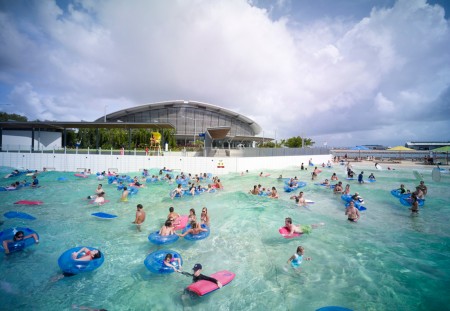 Darwin's new Wave Lagoon has proved a remarkable success since its opening at the beginning of May.

Facility managers, the Darwin Waterfront Corporation, have reported that more than 16,000 people walked through the gates in the first four weeks of operation.

The Wave Lagoon and the adjacent recreation lagoon form part of the $1.1 billion Darwin Waterfront project. Being built over a period of 15 years, the Waterfront is already home to the Darwin Convention Centre (opened in July 2008), a new cruise ship terminal, two new hotels along with the aquatic facilities.

The wave production system from Scotland's Murphy Waves uses four x 75kw high performance fans and a pressure plenum combined with a stepped wave-producing caisson structure to provide waves up to 1.7 metres in height,and boogie waves in excess of 1.2 metres which Geoff Ninnes believes are "the highest pneumatic waves in the world" for a pool of this size.

The Darwin Wave Lagoon is featured in the July/August 2009 issue of Australasian Leisure Management.