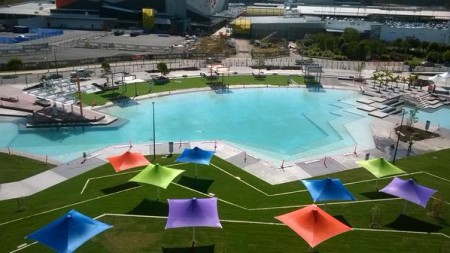 The $10.3 million lagoon and aquatic play area, which is expected to tival shaping up to rival Brisbane's South Bank beach, was named after the nearby Orion Springfield Central shopping centre.

Ipswich Mayor Paul Pisasale welcomed the sponsorship agreement with Mirvac, stating “we couldn't be more proud of Orion Lagoon and I want to thank Mirvac for their ongoing support.

"Orion Lagoon is equal in size to the famed beach at South Bank and one of the largest outdoor recreation facilities of its kind anywhere in Australia.

"This is a huge achievement for the city and is expected to bring 100,000 visitors to Ipswich each year which will provide a tremendous boost for local businesses.

“With the inclusion of a kiosk, barbecue facilities, enhanced lighting and outdoor furniture local, local and visiting families can come down and enjoy a splash in the lagoon with the kids or meet friends for lunch all within easy access to Orion Town Centre and the Springfield central train station."

Mirvac Group Executive Susan MacDonald said the Orion Lagoon, combined with the soon to be completed stage two works of Orion Springfield Central, would create a leisure destination for all ages.

She added “we are developing Orion Springfield Central as a lifestyle precinct.

“It will be the heart of the community focussed on offering an experience that is much more than shopping.”

Mirvac will create a pedestrian link from the lagoon to Orion's dining and cinema precinct that is due to open in November.

Lifeguarding operations at the Orion Lagoon are being undertaken by Australian Crawl.

The lagoon has three main areas:

• A multi-level area from 300 to 600mm deep.
• Main body which has up to 1.5 metres depth and features a 50 metres lane to one side.
• An elongated ‘tail’ separated from the main area by a footbridge for toddlers with a 300mm average depth featuring play areas such as water squirts, stepping stones, concrete beaches, water running over rocks, wading and exploration areas.