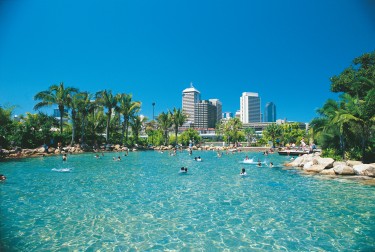 Campaigning in the Queensland election, State Premier Anna Bligh has announced plans for a major expansion of Brisbane's South Bank precinct, to include an Olympic-sized swimming pool, new commercial and residential buildings and a potential national Indigenous museum.

Premier Bligh said the next stage of South Bank development would evolve over a 15 to 20 year period, with the entire precinct expanding from 42 to 69 hectares in size.

The new project, billed as South Bank 2, would form a 5 kilometre long recreational strip running from the Story Bridge to Hockings Street when completed. It would include a 50 metre swimming pool and aquatic play area, green space, picnic and barbecue areas, markets and a retail and dining precinct.

Premier Bligh said her Government had spent six months planning on the extention, becinning negotiations with land owner Parmalat to acquire the land. The Queensland Premier suggested that new commercial and residential buildings would offset the costs of building new public infrastructure.

Premier Bligh explained "we have a vision that can make the Queensland capital one of the most people-friendly river cities in the world.

"We are on the cusp of unprecedented prosperity in Queensland and our job is to guide private investment in ways that can benefit all Queenslanders."

"Through World Expo 88 and its great legacy, South Bank transformed Brisbane from a big country town into a vibrant capital city. Now we want to deliver a major expansion."

The project would include a new cultural institution, with an Indigenous museum a possibility.

Premier Bligh added "given the importance of Kurilpa Point to Brisbane's traditional owners, a new cultural institution highlighting Indigenous culture could be developed

Liberal National Party leader Campbell Newman labeled the plan as a sign of Premier Bligh's fear she would lose her seat at the 24th March election, stating "is the Premier that worried that she is going to spend money in her area on the eve of an election rather than in all those communities suffering from the floods?"