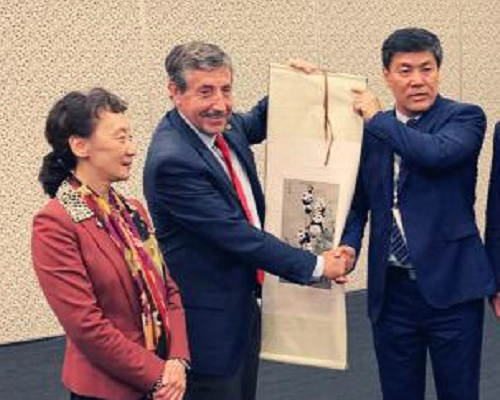 The Chinese city of Chengdu has officially been announced as the host of the 2025 World Games, the 12th edition of the multi-sport event.

The announcement, made at SportAccord Gold Coast this morning, follows the city in the province of Sichuan being the sole bidder for the event, making the confirmation by the International World Games Association (IWGA) effectively a formality.

The World Games is the second multi-sport event secured by Chengdu in recent months, following the city being awarded the 2021 Summer Universiade in March.

It will be the second time the World Games will take place in Asia, following Chinese Taipei staging the 2009 edition.

The decision to award Chengdu the Games was taken at the IWGA Executive Board meeting yesterday, with the decision ratified at today's General Assembly.

Chengdu state they plan to stage the event from 7th to 17th August 2025.

IWGA Vice-President Max Bishop outlined how the the organisation had been forced to alter their bid process.

Initially the IWGA had held discussions with potential applicant cities in six countries, but none had lodged a bid by the deadline of 31st July last year.

This led to a change in strategy in November, when countries and cities were identified and approached by the IWGA over potentially hosting the Games.

Chengdu were ultimately approached with the Chinese city lodging a bid book in February, with Bishop and IWGA Chief Executive Joachim Gossow leading a delegation on the visit the following month.

IWGA officials praised the superb venues, experienced personnel and accommodation in Chengdu, while they secured agreements over areas of concern, such as the sport programme, allocation of venues.

The sport program is expected to be confirmed following the 2021 World Games in Birmingham.

IWGA President Jose Perurena stated "by signing a contract with one of the most forward-looking and dynamic cities in China, we have signalled our arrival as a major power in international sport.

"Following our 2021 event in another great country, the United States, we are excited now to start work with our Chinese partners on plans for 2025.”