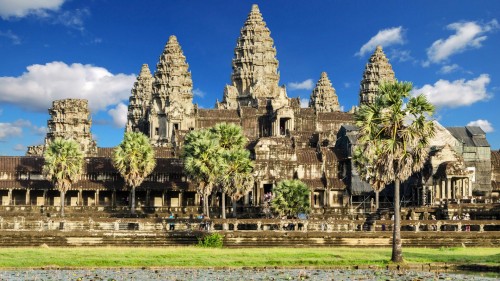 Cambodia has attracted 1.79 million foreign visitors in the first five months of this year, up 19% compared with the 1.5 million tourists in the same period last year.

Neighbouring countries, Laos and Thailand, ranked fourth and fifth on the list of tourist's country of origin with 146,300 Laotians and 96,000 Thais visited Cambodia during the five-month period, up 80% and 23% respectively.

About 49% of visitors came to Cambodia by air, 49% by land and the rest by waterway.

Tourism is one of the sectors supporting the economy in this impoverished South-east Asian nation. Last year, the country received some 3.5 million foreigners, earning more than US$2 billion.

The Cambodian Tourism Ministry expects the country to receive around 4 million foreign tourists this year.

Cambodia is well-known for its 12th century Angkor Wat Temple, a world heritage site, which is situated about 315 kilometers northwest of Phnom Penh, capital of Cambodia.

Also, a pristine coastline, which is one of the world's most beautiful bays, stretches in the length of 450 kilometres in four provinces of Koh Kong, Preah Sihanouk, Kampot and Kep.