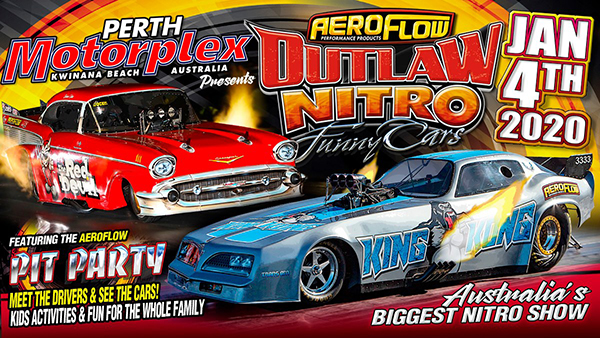 Due to the catastrophic fire conditions in the Norseman area, the Eyre Highway has been closed since Tuesday morning, trapping the Aeroflow Outlaw Nitro Funny Cars due to compete at the Perth Motorplex tomorrow (Saturday 4th January).

The Aeroflow Outlaw Nitro Funny Cars convoy are trapped on the Eastern side of the blaze.

VenuesWest Chief Executive David Etherton while disappointed was supportive of the decision advising “the Aeroflow show is our biggest drag racing event of the year and combined with our local cars, they put on an incredible show.

“We have explored a range of options with the Aeroflow team in an attempt to try and get the Aeroflow Funny Car convoy here, but unfortunately there was just no way to do it safely.

“While we are all disappointed, and apologise to customers for any inconvenience, we will be guided by the experts to ensure the safe journey of all involved in the convoy.

“We thank everyone involved for their support and understanding and sincerely hope to see you at Perth Motorplex on Saturday 4th January for plenty of top class drag racing action.”

Aeroflow Outlaw Nitro Funny Car Series Manager Morice McMillin was devastated stating “as a series we are absolutely gutted about not making it to Perth for January 4th, the trucks have been on the road from Sydney since Sunday and have been unable to get through to Perth safely. We are so disappointed for our fans, our fellow racers and the Perth Motorplex.

“The Perth event is one of our favourites on the calendar and for it to be taken away by circumstances out of our control is hard to take.

“The fires across the whole country have been devastating and we must thank all of those servicemen and women who have put their lives on the line to protect so many individuals and their homes.

“We have explored as many ways as practically possible to get the last 1,200kms of the journey completed in time for the event, but with the roads not expected to be open until Monday, it was a very tough decision that we had no choice but to make. To our Perth fans, we will be back bigger and better!”

VenuesWest advise that the event itself will still go ahead with 10 Top Doorslammers battling it out in the Summer Slam series, along with seven of the wildest Nitro Bikes in the West and 2 local Nitro Funny Cars, “Beach Bomb” and “Nitro Thunder” racing in a no-holds-barred 3 round match race.

Perth Motorplex will have face painters, balloon twisters and giveaways at the Summer Slam Showdown in the pits at 4.30pm, where fans can get signed posters from all the Doorslammer teams and many of the other 150 teams competing at this event.

Event entry has been reduced and will be just $25 for an Adult Silver Ticket, which presents great value for an event of this calibre.

Patrons who have Pre-Purchased tickets will receive a FULL REIMBURSEMENT and can re-purchase tickets to Saturday’s event at the revised rates below: