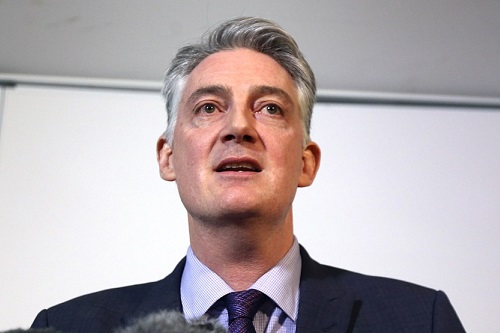 The Board of Basketball Australia today announced the imminent departure of Chief Executive Anthony Moore.

Moore, who has been in the role since October 2014, will finish at the upcoming Annual General Meeting on 27th October.

Announcing Moore’s exit, Basketball Australia Chair, Ned Coten advised “Anthony has made a terrific contribution as CEO. He has played a major role in helping steer BA to improved financial stability and securing an historic commercial deal which will see USA Basketball play Australia before more than 100,000 fans in Melbourne in August 2019.

"The BA Board and Anthony have mutually agreed that now is the right time for a new Chief Executive to take the business into its next phase of growth. The Board thanks Anthony and wish him well in his future roles.”

“BA is better placed for the challenges of the new era due to Anthony’s efforts."

The decision follows Moore’s successful delivery of key priorities during his four year tenure, and a Board review of the five year strategy.

Working with his team and the Board, Moore’s contribution has included overseeing a significant financial turnaround of the business with revenue rising from $10.1 million in 2014/15 to a forecast $23.6 million in 2018/19; development towards a National Registration System for the sport; record participation numbers; forging closer ties with the Australian Sports Commission, Australian Olympic Committee and Australian Paralympic Committee; and great international success in men’s and women’s basketball, across both our senior and junior programmes.

Commenting on his departure, Moore advised “it has been both a privilege and my absolute pleasure to lead the sport I love. I’m very proud of BA’s achievements under my leadership and want to ensure our Executive team, Board and State Associations are in the best possible position for the challenges ahead.

"I also want to thank the Board for their support and guidance to me as CEO. It’s been a great experience to lead through this time of development and success for the sport of basketball.

“We have built the reputation of Basketball Australia here at home and internationally. In part this is thanks to staging the 2016 Olympic qualifiers at Rod Laver Arena - returning basketball to a big arena. The sold-out double header of 15,000 fans for our Opals and Boomers set the benchmark for our ambitions.

"My hope is that next year’s Boomers vs USA Basketball games will write basketball’s page in the history of Australian sport. I now look forward to watching that as a basketball fan.”

The Board and Moore have agreed that the search and transition process will begin immediately in order to onboard the new CEO as far as possible in advance of the 2020 Olympic and Paralympic Games.

Paul Maley (BA’s GM - Leagues and Competitions) will be the acting Chief Executive while this process is underway.