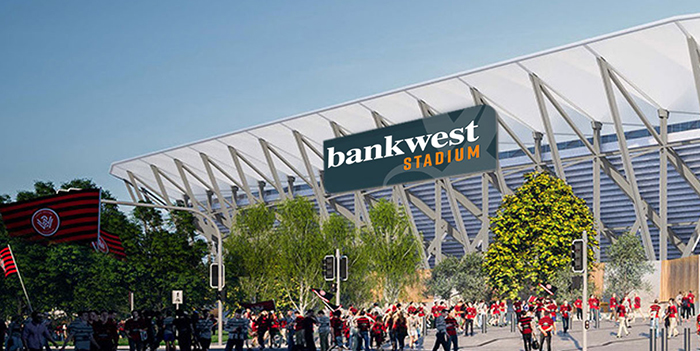 Western Sydney Stadium will now be known as ‘Bankwest Stadium’ after a seven-year partnership between the NSW Government and Bankwest for naming-rights of Western Sydney’s newest purpose-built stadium was announced today.

NSW Minister for Sport and Minister for Western Sydney Stuart Ayres made the announcement at the Stadium today alongside Bankwest Managing Director Rowan Munchenberg.

Minister Ayres advised “Bankwest has embraced the opportunity to be part of booming Western Sydney and the company’s commitment to the naming rights of the venue is a huge vote of confidence in both the future of the Stadium and the region.

“This deal is important for the Stadium to be financially self-sustaining, making sure there is no burden to taxpayers to cover ongoing running costs.

“Bankwest Stadium is a game changer for sports fans across Western Sydney.”

Managing Director Rowan Munchenberg said Bankwest was thrilled to support this critical piece of community infrastructure in the vibrant, diverse and growing corridor of Western Sydney.

Munchenberg added “the Bankwest Stadium partnership sends a clear message to the people of Western Sydney that we’ll continue to invest in products and services that meet their needs.

“Our vision is to deliver amazing customer experiences that matter, which is strongly aligned to the vision of this stadium ‘to empower world-class fan experiences’.

Set to open in April next year, Bankwest Stadium's 2019 calendar of events and activities includes:

Bankwest Stadium will also host a range of community events, as well as meetings, functions and other special events.

The Stadium is owned by Venues NSW on behalf of the NSW Government and operated by VenuesLive.