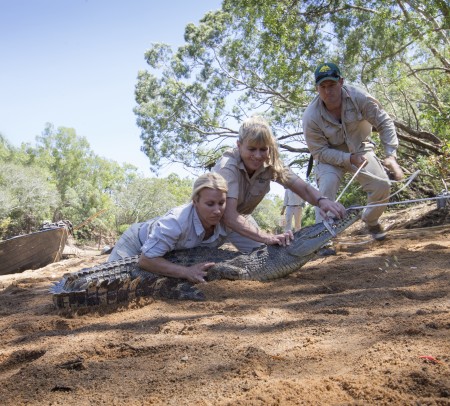 The Irwin family, Australia Zoo and University of Queensland team are gearing up for the 2015 crocodile research trip, with preparations in full swing.

This team of highly experienced crocodile experts will soon join forces and make their way to the Steve Irwin Wildlife Reserve, a pristine 335,000 acre conservation property on Queensland’s Cape York Peninsula, where they’ll spend the month of August studying crocodiles in the Wenlock River.

Australia Zoo, in partnership with the University of Queensland and Australia Zoo Wildlife Warriors, now manage the longest continuous study of crocodiles in the world, with 129 currently being tracked in the Wenlock River – a number that continues to expand each year.

Using the advanced ‘capture and study’ technique invented by Steve Irwin himself when he first began studying crocodiles in 1996, Professor Craig Franklin and his team from the University of Queensland - along with Australia Zoo’s crocodile experts – will make use of satellite tracking devices to determine new information about the species, ultimately helping to protect people and crocodilians around the world.

Research from previous trips has been vital learning that crocodiles can spend more than three (and it is believed up to seven) hours underwater; unlocking secrets regarding their diet, crucial information on their movement patterns, and much more to aid in the conservation of these incredible apex predators.

In particular, 2014 marked an exciting new era as the Eskitis Institute, a drug discovery research centre at Griffith University, brought their important research to the Reserve – further expanding its use for life saving research.

Moving forward with the research, 2015 will see the recapture of crocodiles that the research team has been following for the past three to six years to ascertain diet, examine environmental drivers for movement and behavioural patterns of crocodiles with a focus on temperature, and deploy satellite-dive transmitters to look at long-scale movements and diving behaviour.

The research team also aims to broaden its horizons this year by venturing into a larger multi-species study, which involves not only deploying acoustic tags in large estuarine crocodiles, but also other aquatic species in the Wenlock River.

The team aims to eventually track over 230 animals in the river, to allow the animals to be  monitored over the next seven to 10 years.

In a first for the trip, a partnership with Australian Geographic Magazine will see a group of volunteers join in with the research.

Commenting on the program, Terri Irwin is thrilled to be continuing and progressing her late husband Steve’s important research with crocodiles in Cape York.

She explains “the work we're doing on the Steve Irwin Wildlife Reserve will benefit both people and wildlife. When it comes to managing crocodiles, we are learning that it is actually more important to manage people.

”Learning how to keep people safe from crocodiles will ultimately protect visitors to croc territory as well as the crocodilians themselves.”

To ensure the ongoing success of the research, donations from individuals and corporations can be made to the project alive.

For more information go to www.australiazoo.com.au/conservation/projects/crocodiles