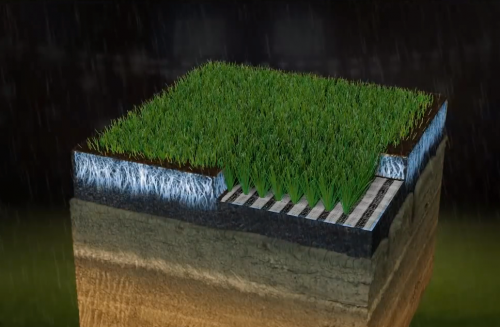 The installation is part of a three-year, $30 million Council project to create all-weather playing fields for Auckland sports in a bid to reduce winter games' cancellations and catch up with demand for field time as the city's population grows.

Hybrid technology offers a stable turf surface and is viewed as an acceptable alternative for artificial turf by sporting traditionalists, who often object to artificial turf, and in where community sport needed a boost in field capacity.

The new installation is being welcomed by the Auckland Rugby Union whose Mitre 10 and NPC Cup teams will be based at Nixon Park from next year.

Commenting on the project Auckland Council Sports Parks Manager Grant Jennings says the sports field is scheduled to be completed in February 2017.

Jennings told Fairfax NZ “this will make it the first hybrid sports field in New Zealand.

"Floodlights are also being installed, which will increase field capacity from around 20 hours to 30 hours."

Central United FC President Ivan Vuksich says the new field will be fantastic, despite the fact that the football club won't be using the ground anymore. The club's junior teams trained at Nixon Park but have had to look elsewhere to accommodate Auckland Rugby's move.

Vuksich added "we had traditional rights at Nixon Park for more than 20 years and it was such a low standard, especially during winter, it really wasn't suitable.

"The new field will be fantastic there is no doubt about that, and we are still negotiating with the council on where we can be moved to."

Auckland Rugby is expected to build its new training facility once the grass renovation is completed by the council, and this will complement the new sports turf.