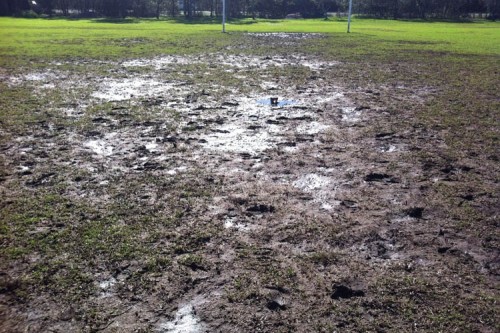 Auckland's 20% cancellation rate for winter sports games because of water-logged fields has led to a call for a $103 million boost to field improvements over the next decade.

Auckland Council closes fields when it thinks further play could cause long-term damage to the surface.

During the 2011 winter season for football codes, Auckland newspapers reported numerous complaints from parents about children missing five out of 16 scheduled games, mostly for football, the most popular game.

It estimated $10.3 million a year over the next decade, and she would ask for that when the council prepared its long-term budget.

Coney explained "we need to meet rapidly increasing demand and provide playing surfaces that stand up to high use and wet winters."

The $103 million funding would provide 20 new artificial fields - half of them in the central area, four in the south and three each in the north and west. However, there would still be a potential need for up to 300 sand-carpet field upgrades to help meet shortfalls for training.

The present regional budget for capital improvement is $25 million, with $30 million spent on field maintenance.

'Sportsfields for a Growing City' found that the Auckland region's 777 winter fields for community use gave the capacity for 8,544 playing hours a week and could meet demand - if it were not for wet-day closures.

It was predicted that the shortfall in capacity because of the closures would worsen from 1,724 hours to 2,216 hours in a dry season, and to 2,984 hours allowing for closures.

For more information go to http://bit.ly/shXSHF