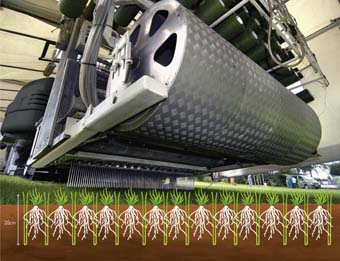 Desso has been highlighting the use of its ‘hybrid’ GrassMaster sports turf system at major venues and for major events around the world.

Having been used at the Arena Corinthians in Sao Paulo, Brazil for the FIFA World Cup 2014, Desso GrassMaster is making its mark in rugby union with the reinforced natural grass system being installed at venues for the 2015 Rugby World Cup and 2015 Six Nations in England.

Here Desso GrassMaster technology is being installed at seven venues: Wembley and Twickenham Stadium in London; Manchester City Stadium; Villa Park in Birmingham, Leicester City Stadium; Sandy Park, Exeter and Stadium MK in Milton Keynes – half of the venues being used for the 2015 Rugby World Cup.

In addition, Desso GrassMaster is also being installed at the tournament training base at Pennyhill Park  - which will also be used or NFL teams as they prepare for their annual season games at Wembley.

For football, Desso GrassMaster’s capacity to withstand heavy use during tournaments. As well as at training bases, sees it widely used in elite European leagues as well as for for the UEFA Champions League and European Championship tournaments.

Netherlands-based Desso Sports Systems have more than 30 years of international experience in sports surfaces and is known for its innovative sports field technology for football, rugby and hockey as well as tennis courts and multifunctional fields.

The company has installed more than 55 million metre² of artificial and hybrid grass worldwide at both amateur and professional clubs. In Asia and Australasia, this includes Desso GrassMaster surfaces at the new Singapore National Stadium and at Forsyth Barr Stadium in Dunedin.

In Australia, Desso Sports Systems is distributed by HG Sports Turf Pty Ltd, well known for its involvement in the design and construction of sports fields and as suppliers of natural turf, synthetic turf and hybrid turf to the sports field market.

HG Sports Turf is currently supplying its turf systems to the 2015 ICC World Cup and the 2015 AFC Cup.