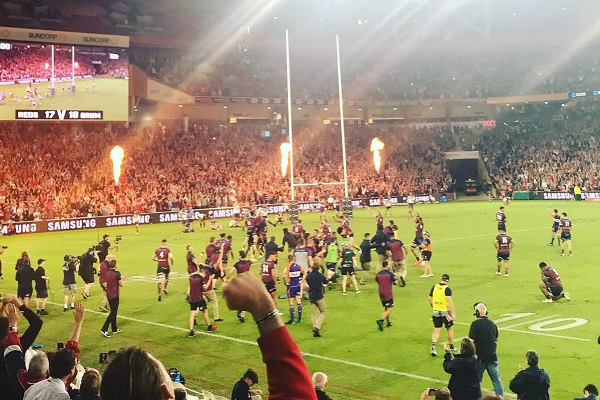 Rugby Australia has announced that Saturday’s final of its Super Rugby AU tournament welcomed the biggest crowd for a domestic rugby match in Australian in almost 20 years, as the Queensland Reds took home the title at Brisbane’s Suncorp Stadium in front of 41,637 people.

With Queensland Premier Annastacia Palaszczuk celebrating the success of the game, tweeting her support for the Reds while at Suncorp Stadium, local artists have condemned what they see as a double standard with sports stadia able to welcome large crowds while arts and entertainment venues are still restricted in their crowd capacities.

A number of artists and stakeholders took to social media to call out Premier Palaszczuk, with comments including:

Ball Park Music quote tweeted the Premier noting “… this is fucked, do more for the arts.”

Amy Shark tweeted “I wish you’d support the music industry like this. We need help x”

Eves Karydas shared the Premier’s tweet, adding, “You can boast about your footy numbers, but do you realise how heavily the music and arts industry feels let down?

“It’s insulting seeing the number of people allowed to cram into sports stadiums while we are left with half capacities and no wriggle room. Music saves people’s lives. Give it the support it deserves.”

Please allow music venues to increase their capacities. It’s insulting seeing the number of people allowed to cram into sports stadiums while we are left with half capacities and no wriggle room. Music saves people’s lives. Give it the support it deserves.

The calls come after Brisbane’s The Triffid owners, John Collins and Brett Gibson started a petition to the Queensland Premier.

They wrote, “While strict rules have been relaxed for Suncorp Stadium to host State of Origin with 50,000 people packed in, music venues are STILL only allowed to operate at a reduced capacity with heavy social distancing restrictions. Venues can’t even breakeven, let alone pay artists and other staff.”

Super Rugby AU final
Saturday night’s television audience for the season finale peaked nationally at 464,000 during the dramatic final stages, with the average audience up 232% from the 2020 Final which was also played between the two sides.

This audience figure does not include those who watched on Stan Sport or streamed on 9Now.

The crowd at Suncorp Stadium on Saturday night was the one of the largest for an all-Australian derby in Super Rugby history, just short of the 42,237 that witnessed the Queensland Reds against the NSW Waratahs at the same venue in 2004.

Commenting on the success of the game, Rugby Australia Chief Executive, Andy Marinos advised “the 2021 Harvey Norman Super AU Competition has continued to grow from strength to strength this year across all metrics.

“And thank you to all the fans. This wouldn’t have been possible without you and we look forward to you joining us on the ride into Harvey Norman Trans-Tasman and then the eToro France Series after

This audience figure does not include those who watched on Stan Sport or streamed on 9Now.