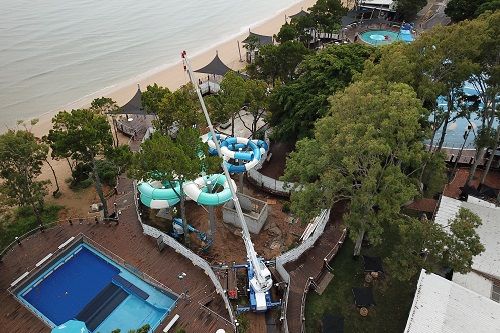 Aquatic play options on Hervey Bay's Esplanade have been expanded over the holiday period with the addition of two new waterslides at the WetSide Water Park in Hervey Bay.

Opened just before Christmas, the $800,000 waterslide project was equally funded by Fraser Coast Regional Council and the Queensland Government, under the Local Government Grants and Subsidies Program (LGGSP).

Fraser Coast Events and Recreation Councillor Darren Everard explained that the expanded aquatic play area, which had suffered a series of delays prior to opening "deliver an amazing facility the Fraser Coast community and visitors can enjoy throughout the remaining festive season and beyond.

“These two 8.8-metre high slides will add to the popularity of WetSide, broadening the water park’s appeal to all ages including the young and young at heart.

“Along with the newly opened adventure playground at Seafront Oval, the trio of attractions on Pialba’s foreshore will enhance the appeal of the Family Friendly Fraser Coast.”

Waterslides were provided and installed by Australian Waterslides and Leisure.

The Seafront Oval is also the location for inflatable water park Splash Lagoons. 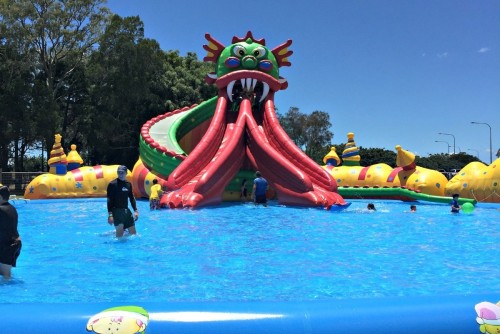 It is operated by Party Time Amusements and owner Aaron Bourke.

The WetSide Water Park was opened in by the Wide Bay Water Corporation in 2009 as the WetSide Water Education Park, an innovative step in public recreation that set out to deliver 'infotainment' in a free, outdoor setting.

For more information on Australian Waterslides and Leisure click here to view their entry and contact details in the Australasian Leisure Management Supplier Directory.

Images: An aerial view of the Australian Waterslides and Leisure installation at the WetSide Water Park in Hervey Bay (top) and Splash Lagoons (below).