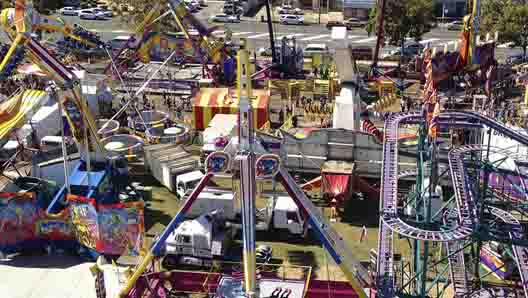 While research shows that Australia's agricultural shows are in decline, events in country and regional Australia are thriving.

In August, research published by the Queensland Chamber of Agricultural Societies Inc. (QCAS) showed that overall visitor numbers and the show movement in general are in decline with fewer shows operating and fewer Australians attending shows than 12 years ago.

The study, 'An Economic & Social Impact Study of Australian Agricultural Shows', conducted by Zark Consultancy for QCAS highlighted the decline in show numbers and overall attendance, and suggested that "show societies may need to establish new and improved ways of attracting and engaging visitors and sponsors, marketing, fundraising, and conducting research."

Yet while agricultural shows face the challenge of being relevant in the modern age, and being run more professionally, anecdotal evidence suggests that events in country and regional Australia, the heartland of agricultural shows, are growing at an unprecedented rate.

In a feature, 'Event Evolution' in the latest issue of the printed Australasian Leisure Management magazine, Nigel Benton highlights that, in tandem and sometimes as part of the growth of live performances and music festivals, a new generation of one, two and three-day specialist and targeted events focusing on food and wine (with wineries in NSW and Western Australia now established as concert venues); motor vehicles and racing; music; sport and country activities such as rodeos, races and campdrafts; as well as multicultural gatherings are gaining more support than many traditional regional agricultural shows.

Backed by major corporations, often mining and resources companies, along with State Government event and tourism agencies, this new generation of events is transforming the entertainment scene across the country.

R.M. Williams Chief Executive (and former General Manager of the Royal Agricultural Society of NSW) Hamish Turner recently explained "regional Australia has changed, it's not just (about) farming anymore with the mining and resource sector embellishing itself and looking to do the right thing by communities in which they work."

As a result, Turner believes "good quality regional events are getting a life of their own particularly in Queensland, the Northern Territory, Western Australia and parts of NSW."

A trend that seems to be emerging is that where companies might have once been among a suite of sponsors at agricultural shows, or might have backed part of an entertainment program, major brands are now backing either their own events, or events where they have overall naming rights.

Hamish Turner suggests that "major companies do not just want to be sponsors of existing events, they want to be partners, to have influence and to have events deliver specific outcomes."

The full feature can be read in the September/October 2012 issue of the printed Australasian Leisure Management magazine.