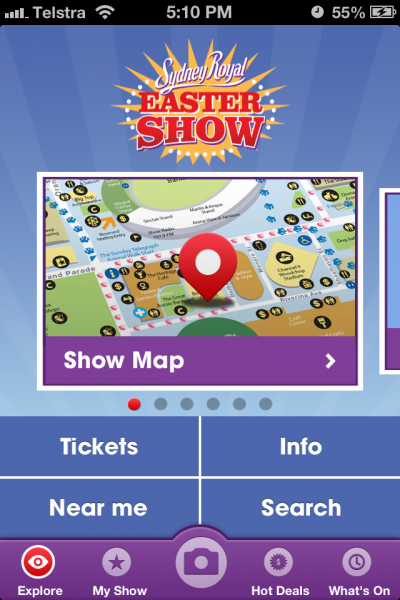 Sydney's Royal Easter Show has opened and over its 14 days will feature 13,000 animals, 29,000 competitive entries and pump an estimated $500 million into the state's economy.

In the Carnival area, the Royal Agricultural Society of NSW (RASNSW) state "we have all your Show favourites as well as the freakiest, scariest, hottest experience direct from the US, Hollywood Horrors."

Hollywood Horrors is billed as featuri(guests) on a spine-tingling journey to the dark side and beyond with a series of terrifying encounters with animatronic models that leap from dark corners, and 15 scare actors that will leave you trembling with fear."

This year's show will offer a record 331 showbags with 130 showbags under $10 to help the family budget.

The Wild Ride of Cobb & Co will be the centrepiece of the Main Arena Spectacular each night. RASNSW say that the new production is a tribute to those who delivered mail, passengers, gold and supplies to the regions from 1854 to 1924.

The show will also feature the new act Lumberjack Show, Australia's tallest steer, international rodeo as well as old favourites including woodchop, the Grand Parade and the animal nursery.

This year's Royal Easter Show has also seen the introduction of an all-new iPhone app, which includes a number of interactive features only available to app users.

RASNSW General Manager of Marketing and Strategy Karen Bolinger explains that the app includes "a full listing of what's on and iPhone users can create a list of their favourite events, acts, showbags and carnival rides - they won't miss a thing."

It follows the Sydney Royal Easter Show's forays into social media, with a dedicated Facebook page and Twitter feed. Here, Bolinger adds that "the app is fully integrated with our social media channels so app users can share their thoughts with their friends and social media networks."

The tool can be downloaded from the iTunes app store and costs $2.49.

The Sydney Royal Easter Show whihc runs from 14th to 27th April is expecting to attract in excess of one million visitors this year.