AFL Victoria to benefit from funding for grassroots facilities 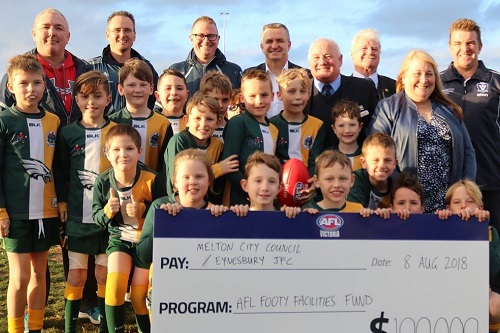 AFL Victoria has announced that it has recently pledged $2.76 million in AFL funding to dozens of local facility projects across Victoria.

Projects that best link directly to AFL Victoria’s Football Facilities Development Strategy, support female football and increase ground capacity to cater for ever-growing participation in the game have been successful in securing part of the $2.76 million funding allocation.

AFL Victoria Chief Executive, Steven Reaper said the funding was just one of many initiatives supporting grassroots football and was key in ensuring all Victorian’s have the opportunity to participate in football across the state.

Reaper advised “community football is the lifeblood of our sport and with our participation rates growing year on year and with female football booming, the provision of welcoming facilities that can cater for this growth is critical.

“Whether it is new lights, oval surface upgrades or female friendly changerooms, these spaces require upgrades so that our volunteer led clubs can continue to deliver their incredibly important services to their communities.”

More than 1,200 participants from the Taylors Lakes, Deer Park and Keilor Park Football Clubs consisting of NAB AFL Auskick participants, junior mixed and boys teams and senior male and female teams will reap the benefits from such a project.

In addition, sports funding offered to Melton Council will see the creation of Eynesbury’s first ever AFL  ground. With the community growing to over 3,000 people, the new ground will see its junior football club have a home of their own.

Reaper thanked the AFL for their support, adding “the AFL’s contribution of this funding is part of the AFL’s ongoing contribution to community football facilities. Since 2007, the AFL/AFL Victoria have invested more than $16 million in funding to generate $300 million in investment in this important infrastructure.

“I would also like to thank the Clubs, Region Commissions, Leagues and Councils for their work on developing these projects and bringing them to our attention, as well as the work they do with all levels of government to forward plan for our game and their communities.”

Projects will now be submitted to various Victorian Government and other funding programs to secure the additional funding to enable them to proceed.