Adelaide Indigenous Festival celebrates the work of more than 1000 artists 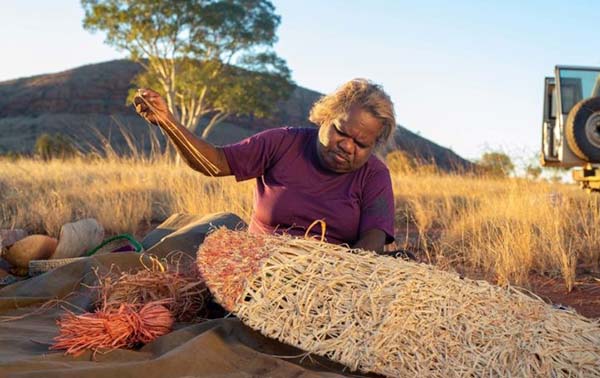 Tarnanthi: Festival of Aboriginal and Torres Strait Islander Art 2019 features the work of more than 1000 artists from across Australia in a range of mediums.

AGSA has also announced that in 2020 Tarnanthi will feature an exhibition in France for the first time. The gallery, in collaboration with APY Collective and the Regional Council of Brittany, will present Kulata Tjuta at the Musée des Beaux-Arts de Rennes, in Brittany, France, in October 2020.

The centrepiece of the Brittany exhibition will be the signature work of the 2017 Tarnanthi festival – a spectacular installation titled Kulata Tjuta, meaning ‘Many Spears’, which comprises more than 500 spears, suspended in mid-air.

Thrilled that the Tarnanthi legacy would be shared beyond Australian shores next year, AGSA Director Rhana Devenport advised "as Tarnanthi shows so vividly, art can communicate across cultures and across continents.

“And through art, Tarnanthi articulates a message about the depth of culture in this land – a message that shapes lives locally, attitudes nationally and, increasingly, awareness internationally.”

Tarnanthi is a Kaurna word that means the first light of day or the first sight of a seed sprouting. The Kaurna are the original people of the Adelaide Plains.

This weekend in Adelaide features the Tarnanthi Art Fair at Tandanya National Aboriginal Cultural Institute where works from 50 art centres and more than 500 artists will be available for purchase.

Tarnanthi Artistic Director Nici Cumpston said Adelaide and South Australia had become a gateway to Aboriginal and Torres Strait Islander Art through the annual festival, which was first run in 2015.

Cumpston added that the festival attracted visitors from around Australia and the world and was also an important commercial opportunity for many of the artists, stating "for Aboriginal and Torres Straight Islander people being able to showcase their works of art and having their art for sale is a really important part of their lives to survive and to continue making work and Tarnanthi provides that opportunity across many different levels.

“It’s also an opportunity for Australians and people from around the world to really gain an understanding of Aboriginal people and our culture.

“The artists are really pushing themselves, pushing their ideas and Tarnanthi is providing that opportunity through the support we can give financially but also through meeting people who can help them realise their ideas.”

The South Australian Museum, located next door to AGSA on Adelaide’s cultural boulevard, North Terrace, is home to the world’s largest collection of Aboriginal material, culture and art.

The museum is hosting two exhibitions during Tarnanthi: Still in my mind: Gurindji location, experience and visuality and Kondoli: the Keeper of the Fire.