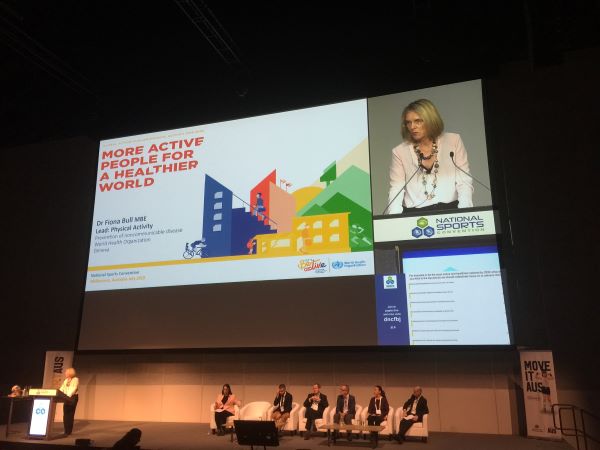 Talking today at the opening session of the National Sports Convention, World Health Organization’s (WHO) Professor Fiona Bull, spoke of WHO’s goal and role in disseminating their Global action plan on physical activity 2018–2030: more active people for a healthier world at a country and local level.

Regular physical activity is proven to help prevent and treat noncommunicable diseases (NCDs) such as heart disease, stroke, diabetes and breast and colon cancer. It also helps to prevent hypertension, overweight and obesity and can improve mental health, quality of life and well-being.

Professor Bull noted that to support national efforts to implement the plan, WHO is launching an advocacy campaign to promote physical activity, Let’s Be Active: Everyone, Everywhere, Everyday. This new drive, launched at the Portuguese Football Association’s iconic Cidade do Futebol (City of Football), aims to encourage governments and city authorities to make it easier for people to be more physically active, and healthier.

WHO’s goal is for reducing physical inactivity by 2030 by 15%. Professor Bull highlighted that in order to put together action plans and make recommendations, the causes underpinning the  levels of physical inactivity need to be understood before solutions can be developed

WHO advise that worldwide, one in five adults, and four out of five adolescents (11-17 years), do not do enough physical activity. Girls, women, older adults, poorer people, people with disabilities and chronic diseases, marginalised populations, and indigenous people have fewer opportunities to be active.

Regular physical activity is key to preventing and treating noncommunicable diseases (NCDs) such as heart disease, stroke, diabetes and breast and colon cancer. NCDs are responsible for 71% of all deaths globally, including for the deaths of 15 million people per year aged 30 to 70.

Professor Bull advised that for countries such as Australia to be effective in addressing their high levels of physical inactivity they need to adopt a unified approach, think differently and be innovative to reach more people. There is no single solution but a whole of community and whole of systems approach is needed whereby connections are capitalised on.

Canada, France and Switzerland have successfully developed such a national plan that adopts a unified approach.

There is a requirement for sport to be re-imagined where the focus is shifted from sport to re-recognising physical activity as being a global health priority.

A key feature of this new plan is its call for a 'systems-based' approach where effective implementation will require bold leadership combined with cross-government and multisectoral partnerships at all levels to achieve a coordinated, whole-of-system response

The plan sets out four objectives and recommends 20 policy actions that are applicable to all countries and address the cultural, environmental and individual determinants of inactivity.

Working in partnerships, WHO will support countries to implement a whole-of-community approach to increase levels of physical activity in people of all ages and abilities. Global, regional and national coordination and capacity will be strengthened to respond to needs for technical support, innovation and guidance.

WHO Director-General Dr Tedros Adhanom Ghebreyesus noted at the launch of WHO’s action plan in June 2018 that "being active is critical for health but in our modern world, this is becoming more and more of a challenge, largely because our cities and communities aren’t designed in the right ways.

"We need leaders at all levels to help people to take the healthier step. This works best at city level, where most responsibility lies for creating healthier spaces."

World leaders will meet later this year to take action on physical inactivity and other causes of NCDs, and mental disorders, when they take part in the Third United Nations General Assembly High-level Meeting on NCDs, being held on 27th September in New York.