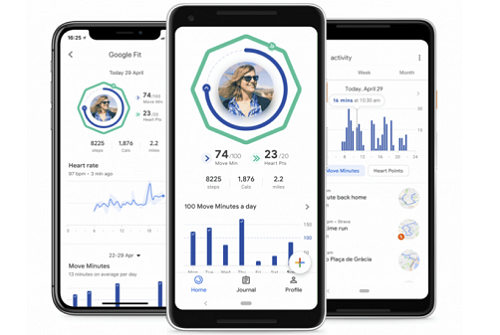 Google has released a new version of its health-tracking app, Google Fit, with the revamped app’s emphasis following recommendations from the World Health Organization and American Heart Association that encourage movement and exercise.

Rather than focus on step goals, the revamped apps give more credit to users for exercising in achievable ways, hoping that they'll reach 150 minutes of moderate activity and 75 minutes of vigorous activity in a week.

The app’s primary activity goals are now ‘Move Minutes’ and ‘Heart Points’. Move Minutes are accrued for all movement, such as walking while Heart Points are awarded for moderate intensity exercise - anything aerobic such as running or cycling.

In an interview with CNBC,  Margaret Hollendoner, Google Fit's Head of Product advised "we noticed that some of our users were intermittent, meaning they'd open up the app at New Years' but their activity levels weren't sustained.

"We wanted to support the users that were struggling to stay motivated."

With a clean, accessible interface, Google Fit coordinates your smartphone GPS and accelerometer features as well other devices like Google’s Wear OS for smart watches and other wearables. The app syncs with more than a dozen fitness counterparts for a more complete picture of health.