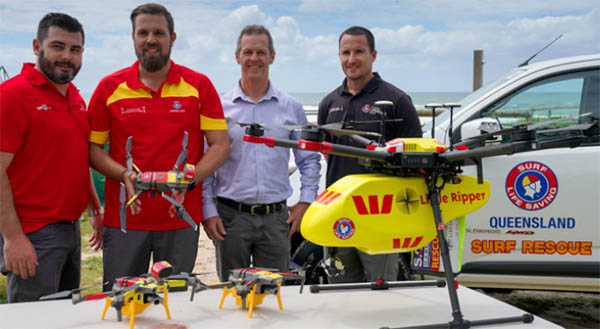 The Westpac Life Saver Rescue Drone program with its partners, The Ripper Group and Surf Life Saving Australia (SLSA), hope to help drastically reduce the number of coastal drownings through the ongoing innovation of drone technology and training for surf lifesavers and lifeguards.

According to the 2019 National Coastal Safety Report, 190 lives were lost on Australia’s coastline last summer. Sea Marker Dye is an innovation that could drastically help reduce this number.

Sea Marker Dye are all-natural, ecofriendly crystals that upon impact with the water, activate into highly visible colour. Deployed from a drone equipped with an onboard video camera, it is a cutting-edge development that will give a clear ‘eyes in the sky’ view to the pilot and lifesavers on the beach, to more easily identify rip currents.

The Ripper Group have developed a custom deployment system which can attach to the widely-used Mavic drones. This engineering breakthrough will make drone-deployed sea marker dye more accessible for life saving entities to employ following a successful trial period.

Westpac’s General Manager Jane Watts advised that Westpac is proud to continue to play a role in the evolution of search and rescue services to help keep Australians and visitors safe noting “since partnering with The Ripper Group in 2016, we’re proud to have been at the forefront of drone technology innovation.”

An extension of Westpac’s partnership with SLSA saw the creation of the Westpac Life Saver Rescue Drone program in 2018, which has played a crucial role in helping bring drone technology and innovation to beaches around the country.

SLSA Chief Executive Adam Weir added “new innovations as developed by The Ripper Group, increase the capabilities of frontline surf lifesavers in identifying and addressing hazards. Programs like the Sea Dye system will be valuable in both identifying rip currents and assisting with off-shore water searches.”

The Ripper Group Chief Executive, Ben Trollope also thanked Westpac’s long-standing investment in aerial search and rescue noting “The Ripper Group’s partnership with Westpac supports the evolution of drone rescue innovation and the potential to save lives in Australia.”

30th June 2015 - SLSA launches book to recognise those who served