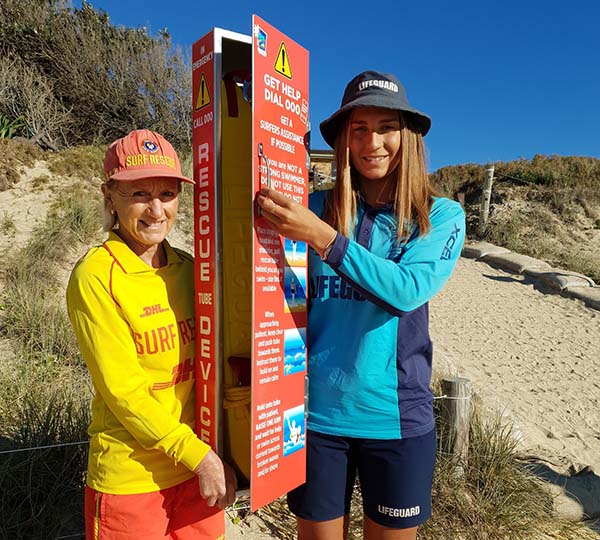 In a joint project between Coffs Harbour City Council’s Lifeguard Service and Sawtell Surf Lifesaving Club, rescue tubes that members of the public can use in an emergency, are being trialled at Sawtell Beach through the peak holiday season.

Rescue tubes are specially designed flotation devices, normally used by lifeguards or lifesavers to assist in water rescues, that can help support the victim’s and rescuer’s weight to make a rescue easier.

Greg Hackfath, Council’s Lifeguard Services Team Leader advised “with most drownings occurring either outside patrolled areas or outside patrol times, it’s vital that we look at all options when looking for ways to prevent more deaths. It’s also an unfortunate fact that would-be rescuers can often be among the fatalities in a drowning incident, so providing a flotation device they can easily access could be vital.”

The trial was proposed by former lifeguard and Sawtell Surf Lifesaving Club (SLSC) member – and long-term local – Mick McGavigan who has long supported providing a remote rescue device, such as a rescue tube, at key locations along the coast.

More recently, Greg Hackfath also suggested the idea after attending the 2017 World Conference on Drowning Prevention where the Hawaiian Lifeguard Association outlined the success of their remote rescue tube program. Council and Sawtell SLSC have been working together over the past 12 months on developing the trial.

Sawtell Beach was selected for the trial as it is a popular beach with patrol services provided by both Council Lifeguards and Sawtell SLSC. The trial will be conducted from December 2019 to March 2020.

The purpose of the trial is to test the use of this equipment in reducing bystander drownings, to weigh up whether this approach is viable and also its potential for use in other locations, bearing in mind the potential resource costs and availability of project partners.

Council will administer the program and Sawtell SLSC will assist in the monitoring of the rescue tube units.

To find out more about the trial, go to Council’s Have Your Say website

This web page is also encouraging people to report any use of the tubes or other feedback.

Image: Sheena McTackett, President of the Sawtell SLSC, and Maddi Carah, Council Lifeguard, with one of the Rescue Tubes.