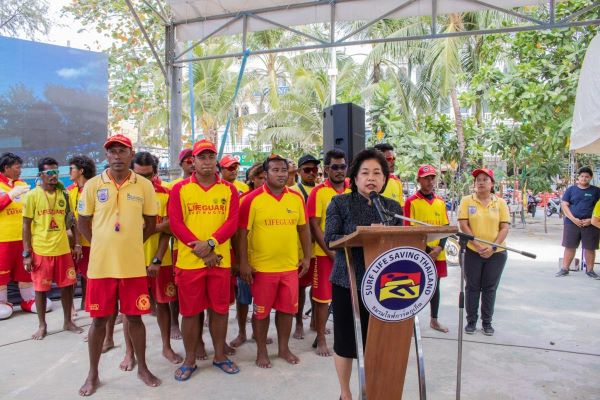 Australian Consul-General Matthew Barclay and Deputy Governor of Phuket and Mayor of Patong said the bond between Australian and Thai lifeguards was very strong.

Consul-General  Barclay advised  “I am looking forward to more skills exchanges between lifeguards from Phuket and Australia in the future.”

A closing ceremony, hosted by the Australian Consulate-General in Phuket and the Phuket Lifeguard Service, was held to celebrate the end of a very successful training program and to promote the ongoing future collaboration of Thai organisations and agencies towards a common goal of coastal risk management, water safety and drowning prevention. It also recognised the efforts of Australian Lifeguard Service trainers from SLSNSW who spent the week in Phuket training their local counterparts.

Training program coordinator David Field said the event was an opportunity to present the second edition of the Thai Lifesaving Manual. The manual was adapted and translated from Surf Life Saving Australia’s Public Safety Training Manual.

A Thai-language version of a children’s book which promotes water safety was also launched at the event. The book, Pirate Kim: Let’s Go Swim by Thu-Trang Tran, was published with support from the Australian Government’s Direct Aid Program.

Two highlights of the ceremony were Australian trainer, Lachlan Field’s demonstration of the capabilities of SLSNSW’s UAV (drone) technology and a demonstration by Thai trainees of a fast-paced rescue scenario to showcase their new skills and knowledge.