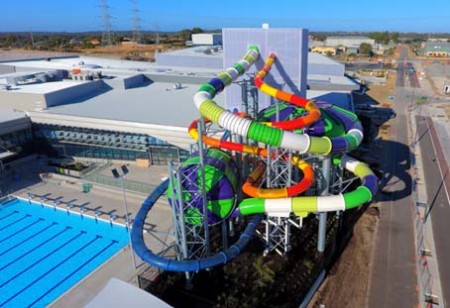 The recent completion of the three waterslides at the Cockburn ARC aquatic, recreation and sport centre is a significant milestone as the new facility approaches its anticipated opening in the coming months.

One of the largest developments of its kind in Australia, the new facility will provide state-of-the-art aquatic and recreation facilities, as well as being the new home of the Fremantle Football Club.

Within the overall project cost of more than $100 million, the aquatic components of the facility include a 50 metre outdoor pool, 25 metre indoor pool, children’s play structure and three large waterslides: an aqua-tube rafting slide; the Space Boat shuttle dual rubber raft ride and, for thrillseekers, the blue looping rocket slide. 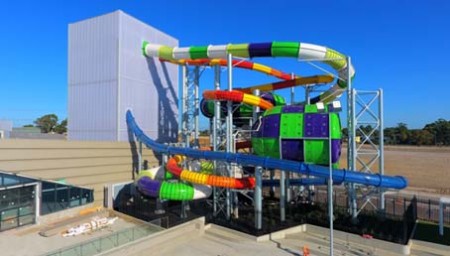 Starting from an 18 metre-high tower, the slides offer a highly visual identity for the new facility.

The Polin Waterparks slides were installed by Swimplex Aquatics, with Commercial Aquatics Australia providing the filtration and hydraulic systems.