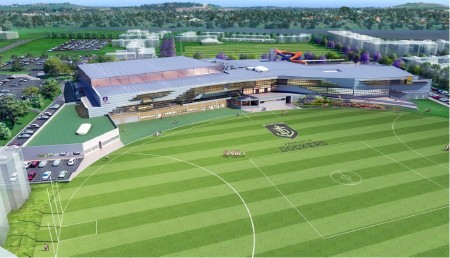 The Australian Sports Foundation (ASF) partnership with Fremantle Dockers AFL club is helping the Dockers fund its contribution to a $109 million integrated community and elite sport and recreational facility at a greenfield site at Cockburn Central West.

The Dockers have launched the Fremantle Dockers Foundation, in association with the ASF, to raise funds for the club’s new headquarters.

The City of Cockburn is contributing $72.8 million to the facility, which will also be a community aquatic and recreational centre. A further $22.4 million has been committed in Government grants, $1m by Curtin University and the remainder will be generated by the club.

The club is hopeful business operators, high net-worth individuals and club supporters will make financial contributions to the Foundation via the ASF. Donations of $2 or more are tax deductible.

Commenting on the fundraising, Dockers Chief Executive Steve Rosich stated “there’s no limit on the funding we’ll look to generate this year and in future years because the more funding we raise, the more resources we can put into our broader community and development programs.”

The Dockers new base will include a state-of-the-art training facility and will boast indoor and outdoor pools, hydrotherapy facilities, an adaptable AFL-sized oval, and a sport and retail shop.

Special projects, such as community engagement activities and education classes for school groups, will also be included.

Bell said the new facility will help attract top players to the Dockers and assist them fulfil their playing potential, stating “there’s no doubt with the technology, science and the education facilities that will be at this training centre that it will give the players a fillip.”

Dockers General Manager of Strategic Projects, Brad Paatsch, who has responsibility for the Foundation, said the ASF provided great assistance with the fundraising project.

Paatsch added “the fundraising advice and strategic direction provided by the ASF has allowed us to successfully launch the project. We have received strong immediate support from our members and supporters with up to 50 donations received within the first few days of going public,” he said.

ASF Chief Executive Patrick Walker congratulated the Dockers on the multi-functional project, concluding “this is a great example of an AFL club working with its partners, members and fans to build an exciting new facility which will provide widespread community benefits.

“While the facilities’ primary focus is on the Dockers to remain one of the leading clubs in the AFL competition, its broad community plans will ensure AFL participation continues to thrive at a grassroots level and pathways to excellence exists for talented players.”

“It is yet another fine example how AFL clubs are setting the benchmark when it comes to partnering with the ASF to raise funds for specific programs.”

Construction works on the new facility is expected to start next month.

It is planned for the club to move to the new site in time for the start of the 2017 AFL season.