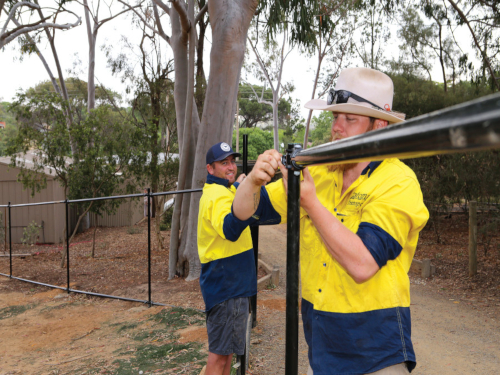 The Wagga Wagga Botanic Gardens Zoo and Aviary upgrade as part of Council’s $900,000 Entwine project is underway. The project is aimed at strengthening the connection between the Botanic Gardens and the Museum of the Riverina through an engaging interpretative trail and refurbishment of historical gardens and places to further activate this precinct.

By the end of November, the Botanic Gardens Zoo and Aviary will have new internal fencing protecting its pair of emus, the garden’s alpacas and the popular kangaroos.

On average the Wagga Wagga Botanic Gardens Zoo and Aviary welcomes around 120,000 visitors a year.

Manager Parks and Strategic Operations Henry Pavitt said the works have been purposely undertaken outside the busy school holiday period to minimise disruption to visitors.

“We’re currently upgrading the fencing in the alpaca’s enclosure… that should be finished by early next week. Once those fences are done, we’ll get started on the emu yard and the dividing fence running through the kangaroo’s area of the zoo.”

The new alpaca fencing will stand 1500mm high, while the kangaroos and emu borders will lift to 2100mm, meeting Department of Primary Industries standards.

To make life easier for contractors working on the project, the zoo’s large, flightless birds will be moved in with their smaller, native Australian counterparts – the Swamp Wallabies.

Upgrading the zoo exhibits with practical improvements like new fencing is just one aspect of the large-scale Entwine project, jointly funded by Council and the NSW Government.

It’s designed to increase visitation to both the Botanic Gardens and the Museum of the Riverina.Project Manager Thomas Lemerle added: “As well as the zoo fencing, Entwine will include new signage around the zoo site, barbecue facilities and a new playground area.

“We are still working on the concept design, but we expect to have it finished by mid-next month.

“This project is going to greatly improve this whole space, creating opportunities for new animals and different exhibits down the track.”

Pavitt advised that there is already significant hype surrounding the possibility of welcoming new creatures - great and small - to the zoo: “A lot of people have said they’d like to see some echidnas. Some of the more exotic animals would be great, but we’ll have to wait and see. More than likely we’ll be going down the native animals line.”

Both Pavitt and Lemerle agree the overdue upgrade will only serve to increase visitation into the future.

Pavitt added: “This is a really timely and important development. We’re also in the process of rectifying the ponds and a few drainage issues, which will hopefully lead to new pens in the future.

“There’s a lot going on, and a lot to be excited about.”