Victoria’s new home of athletics up and running 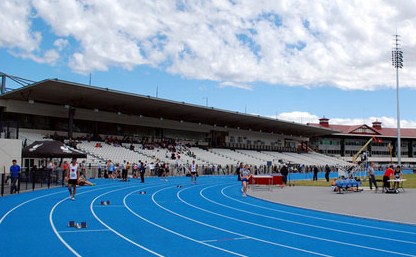 Victoria's new home of athletics, Albert Park's Lakeside Stadium, has been completed and is ready for use.

Speaking after a recent site tour with Victorian the Minister for Sport and Recreation Hugh Delahunty, Victorian Minister for Major Projects Denis Napthine said the athletics competition facilities, including a world class running track, has been handed over from the builder and will be rigorously tested over the coming months.

"The Victorian Institute of Sport building, built inside the heritage 1926 grandstand, will offer an elite training gym with the latest equipment, state-of-the-art coaching facilities, a 25-metre pool and a sprung floor multi-purpose room.

"These features combined with the administration and coaching facilities overlooking the track will give our athletes their best chance of success."

Minister Delahunty addedthat the stadium would be officially opened with the 10 kilometre Zatoptek: 10 on Saturday 10th December 2011, which is expected to attract some of the world's best middle distance runners.

Minister Delahunty stated "I can't think of a more fitting event to officially open this outstanding facility than the Zatopek: 10. Not only is it one of the most famed events on the Australian athletics calendar, for the winner it could mean a ticket to next year's London Olympics.

"The Zatopek: 10 is Australia's most competitive 10,000 metre track event. Past winners have included sporting icons Ron Clarke, Robert de Castella, Steve Moneghetti and Craig Mottram. As this year's event will be an Olympic selection trial, we are expecting fierce competition on a fast track.

"Australia's new home of athletics will help athletes and coaches reach their potential in international athletics, as well as provide a new public space for grass roots athletics participants and the community to enjoy.

"Over the next few months Victorian athletes will have a chance to try out the competition facilities with a series of test events scheduled before the official opening in December."

"It's also bringing together the key athletics bodies and world class training and competition facilities in the one spot, which is just fantastic.

"This redevelopment has brought a great community asset back to life and made it available for use by the greater Albert Park community as well."

"Lakeside Stadium will form an integral part of the Melbourne Sports Hub at Albert Park, which we expect will attract more than 2.3 million patrons each year.

The rebranding of Albert Park's sport and recreation facilities as the Melbourne Sports Hub was featured in the July/August issue of Australasian Leisure Management.