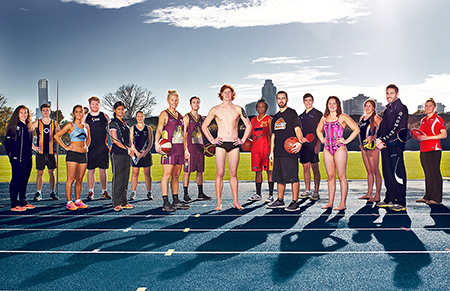 The Victorian Government has made a $6.4 million budget commitment to the State's major aquatic, recreation and sport venues.

Victorian Minister for Sport and Recreation Hugh Delahunty said the funding would go towards ensuring the Melbourne Sports & Aquatic Centre (MSAC), State Netball Hockey Centre (SNHC), and Lakeside Stadium remained at the top of their game.

Minister Delahunty stated "Melbourne's reputation as a sporting capital is built on its impressive collection of sports venues and their role in attracting major events, supporting athlete development and encouraging more people to get more active more often.

"With more than two million grassroots participants at these three venues each year, this $6.4 million boost will ensure there's something for everyone to enjoy, from junior netball at the SNHC, to little-athletics at Lakeside Stadium or learn-to-swim classes at MSAC.

"Funding for these venues will set Victoria up for future growth and ensure we maintain our title as the premier venue for sports in Australia."

The $6.4 million funding boost for these major sporting venues will deliver a number of capital works improvements, including:

• Improvements to outdoor areas and turf upgrades; and

• Rectification of building works to improve safety and access for people with a disability.

Minister Delahunty added "these venues play a vital role in Victoria's ability to attract international and national sports events, from hosting the 2006 Commonwealth Games, to the National Athletics Championships and hockey's Champions Trophy.

"Hosting major sporting events such as these helps to attract thousands of visitors, provides a stimulus for the economy, boosts sports participation, and goes a long way towards giving our state its winning edge.

"With Victoria's major sporting events calendar the envy of the world, it's little wonder that other states and territories are biting at our heels for sports events large and small.

"In the increasingly competitive sporting events market, investments such as these are important in staying ahead of the rest.

"Ongoing improvements to our major sporting venues not only ensure Victorians get the chance to cheer on their sporting heroes, but also have the opportunity to emulate them, week in and week out, at the very same venues."

The $6.4 million commitment complements the Victorian Government's existing contributions to major sporting infrastructure including the $363 million redevelopment of Melbourne Park, the $26.5 million upgrade at Simonds Stadium and $30 million for the MCG Southern Stand.

Minister Delahunty concluded "the Melbourne Sports and Aquatics Centre and Lakeside Stadium in Albert Park and the State Netball and Hockey Centre in Royal Park are managed by the State Sport Centres Trust, and are the home of many sports including swimming, netball, hockey, athletics, diving, badminton, squash, table tennis, Vicsport and the Victorian Institute of Sport."