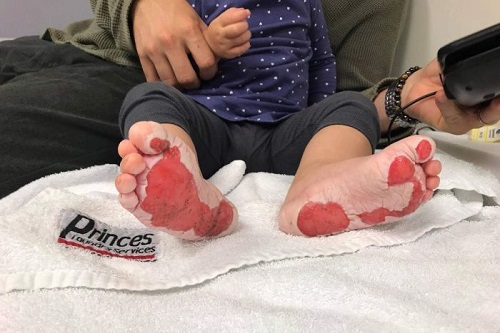 A Queensland mother has advised that her 18-month-old daughter suffered severe burns to the bottom of her feet while playing at the River Heart Parklands in the south east Queensland city of Ipswich.

Simone Pickering posted images of the unpleasant injuries on social media and said her daughter was injured "seconds" after stepping barefoot onto a hot metal plate covering a service pit at River Heart Parklands last week.

As reported by the ABC, Pickering wrote "our daughter just happened to walk a short distance from where myself and family were sitting to find herself paralysed, standing on one of these scorching hot metal plates unable to move due to the intensity of the heat below.

"In seconds the damage had been done. We instinctively tried to get her feet into cool water only to have her hysterically screaming and needing extra care."

Pickering said while her daughter is recovering well she had lost some feeling on the bottom of her feet, adding “the drive to the hospital was the most horrific, heartbreaking 10 minutes of my life to date.

"(I am) angry that even after a full recovery, our daughter will never truly know what is normal feeling in her feet as she won't have any prior memories to draw upon being that she's only 18 months old."

In a statement, Ipswich City Council said the metal plate had now been coated with a heavy paving paint to keep it cooler in hot weather.

The Council said inspections had also been carried out in parks and splashpads across Ipswich for potentially similar situations.

The Council urged parents of young children to be mindful of the risk of all exposed surfaces being hot during summer. 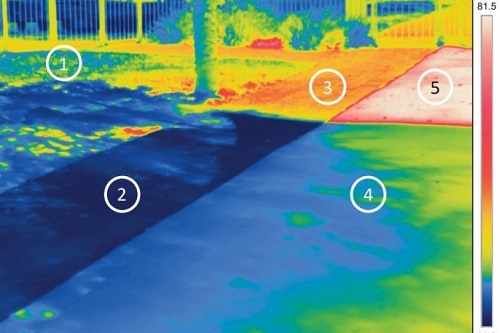 Dr Pfautsch advised “the hottest surface that we found was 105 degrees, which was the inside part of a rubber tyre where metal was woven into the rubber - this was the record-breaking temperature.

"On summer days where you had air temperature of about mid-thirties, we found that soft fall rubber and astroturf was heating up to between 80 and sometimes above 90 degrees celsius."

The study found grass was the coolest surface when compared with concrete, woodchips and bark or mulch.

"Grass is the hardest to maintain but from a thermal perspective it was the best material either in direct sunlight or in shade, it was sometimes 50 degrees cooler than astroturf and soft fall rubber." Dr Pfautsch is hoping to expand the research to public playgrounds in partnership with local governments in NSW.

"I felt very sorry for the little girl in Ipswich, because these are horrific injuries but I wasn't really surprised because it confirmed what we found throughout our research."

The study helped form the basis of the Cool Schools Report, published in September this year, which looked at student thermal comfort and cooling solutions for primary and secondary schools in Western Sydney and New South Wales.

Images: Simone Pickering's daughter suffered these burns while playing in an Ipswich park (top, courtesy Facebook/Simone J. Pickering) and a thermal image of surface temperatures at an outdoor playspace in Sydney (below, courtesy of Dr Sebastian Pfautsch).