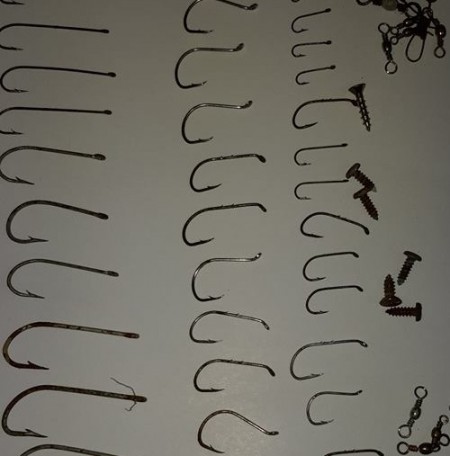 The City of Gosnells has revealed it has been alerted to the unusual finds in the playground sand at the reserve, located between Hunt and Melvin Streets.

However, in a statement, the Council confirmed calls about broken glass in the playground on 30th October and 4th November but on both occasions council workers attended and found no evidence of the objects.

According to a report in Perth newspaper WA Today, Margaret Janeczek said she was walking her dog on Thursday with her granddaughter, who was practising riding her bike without training wheels, when they stopped at the small playground on the Hunt Street Reserve.

She told Radio 6PR "my little granddaughter was playing on the climbing frame and I was standing there by the sand and saw this little bit of metal and thought, 'I'll just pick it up'.

"So I collected them all together and when we were ready to leave I brought them back home and rang the shire and told them there were all those hooks down there.

"They said they would send a team out to sift the sand and see if there were any more."

Janeczek later posted about the hooks on the City of Gosnells 'Neighbourhood Reports' Facebook page so the community could look out for similar hazards.

Some on the page speculated the sand, which also contained other bits of tackle, was carted in straight from a beach. Others suggested all playgrounds should have rubber matting to prevent this dangerous occurrence.

Several stated they no longer let their children play in playgrounds that use sand as flooring.

The City of Gosnells denied it sourced playground sand directly from beaches.

City of Gosnells Chief Executive Ian Cowie was quoted by WA Today as stating “the city does not obtain any sand for its sand pits from the beach.

“White washed sand is used in sand pits and this is sourced from sand quarries.”

Cowie later denied the presence of fish hooks telling the local Examiner newspaper “the city sent an officer to the site within 20 minutes of receiving the call to examine the sand pit and playground.

“A visual inspection showed the rake marks of the previous day were still in place and so no additional raking occurred.

“The officer spoke to a local resident who was there when he arrived and she reported that she had seen nobody at the playground.

“This morning (Friday 6th November) the City of Gosnells sent a maintenance crew to Hunt Street reserve to further examine the sandpit.

“No glass, fish hooks or screws were found.”

Image: Fish hooks and other items reportedly found in sand at a playground at Thornlie in southern metropolitan Perth. (Image: Facebook).