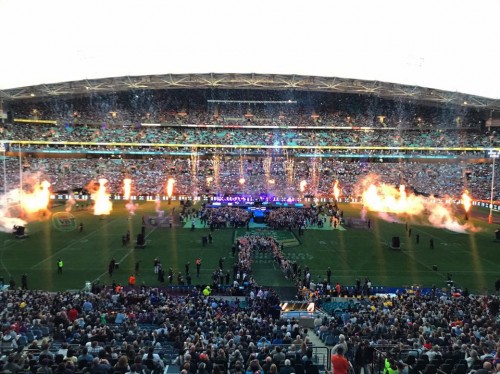 A timeline for the redevelopment of Sydney’s ANZ Stadium has been revealed today following a meeting between the NRL and its clubs.

The clubs have been advised that work on ANZ Stadium will begin after the 2020 State of Origin series, during which the venue will host one game. Although a date has yet to be decided for the fixture, The Australian newspaper said work is expected to commence in June, meaning the NRL will need to find a new host for its grand finals in 2020, 2021 and 2022.

NRL.com said Sydney Cricket Ground will host the 2020 game, with talks being held with the NSW Government for the following two fixtures.

As for the ANZ Stadium’s two main tenants, the Canterbury Bulldogs and South Sydney Rabbitohs, they will need to consider new venues for their home fixtures during the affected seasons, with the new Bankwest Stadium a likely location for the Bulldogs and the Rabbitohs potentially moving to the redeveloped Allianz Stadium.

Commenting on the changes, NRL Chief Executive Todd Greenberg stated “we always knew there would be some challenges for our clubs and for the game with major works being done to the stadium network in Sydney.

“We will work closely with the clubs as we develop the Premiership schedule in coming years, knowing ANZ Stadium as well as Allianz Stadium will not be available.

“Bankwest Stadium has been a wonderful addition to the sport this season and while we know there will be certain challenges over the next few years we also need to consider the fantastic result for the game when Allianz Stadium and ANZ Stadium are completed. We are not losing sight of the fact that over a four-year period we will have three purpose-built rectangular venues opening in Sydney. This remains a great result for the game.”

ANZ Stadium will retain hosting rights for the NRL Grand Final until 2042 as revised plans were announced in March 2018 to redevelop the venue instead of demolishing and rebuilding it.

The NSW Government had at one time planned to knock down the 83,000-seat stadium and building a new one in its place, but backtracked on this decision in favour of refurbishing the existing venue.

The redevelopment will see ANZ Stadium reconfigured as a rectangular stadium seating between 70,000 and 75,000 fans. Work is expected to be completed in time for the 2023 NRL season.

The reconfiguration will bring 46,000 seats closer to the playing surface, the extension of the Stadium’s roofline to ensure all seats are undercover and delivering a better atmosphere and experience for all spectators with the intention of extend the life of the former Olympic Games venue by a further 40 years.