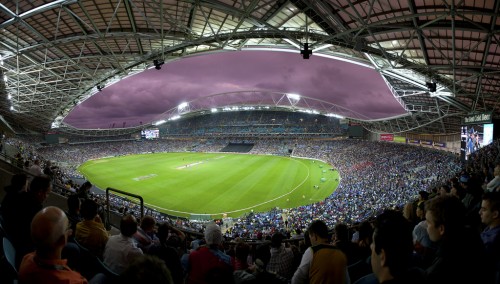 Sydney's ANZ Stadium yesterday marked 20 years since its opening, during which time 28 million fans have passed through its turnstiles.

Since 6th March 1999, when 104,583 fans packed in to Sydney’s Olympic Stadium to attend the historic first event - an NRL double-header with Manly taking on Newcastle and Parramatta clashing with St George Illawarra, the Stadium has witness many historic sporting events as well as memorable entertainments.

20 years on, ANZ Stadium stands as an icon of the new millennium and an enduring symbol of Sydney’s 2000 Olympic Games. With the venue a legacy that exists for fans, athletes, entertainers and the community, the roll-call of memorable moments continues to grow at what is Sydney’s major events stadium.

As a grand stage for many of the nation’s biggest events, ANZ Stadium has attracted record attendances for rugby league, rugby union, AFL, football, and music and entertainment events.

The highest attendance at the Stadium was the 112,524 who packed in on 25th September 2000 - the night Cathy Freeman raced in to Australian sporting immortality.

ANZ Stadium employs more than 100 fulltime staff members and approximately 1800 casual workers. More than half of this workforce resides in Western Sydney.

18 members of the pioneer permanent team and 45 casual employees have been part of the Stadium journey since 1999.

ANZ Stadium Chief Executive, Daryl Kerry who was among the pioneer team that opened the Stadium in 1999, commented “we have all witnessed many memorable sporting and entertainment moments at the Stadium over 20 years, but the Stadium is much more than bricks and mortar.

“I’d like to thank the NSW Government and Venues NSW for recognising the important role the Stadium plays in our wonderful community.

“I would also like to acknowledge the Consortium and the people who were part of that Consortium who won the right to design, build and operate the Stadium.

“We need to thank the Stadium Club Members and the Corporate Clients, many of whom have been part of the Stadium’s journey over 20 years.

“I’d like to acknowledge our event partners – the sporting codes and clubs who have worked with us and allowed us to stage their events – and also our commercial partners. They have all been fundamental to our journey over 20 years

“To the staff who have contributed day and night to the success of the Stadium . . . your dedication and professionalism has been greatly appreciated. That extends to the thousands of casual staff members who have helped us run more than 50 events each year; you too have played an important role.

“Finally, I would like to thank the 28 million people who have walked through the turnstiles to be part of the journey of this Stadium . . . to each and every one of you, thank you for your passion and sense of fun that has helped make the Stadium’s journey so memorable.”

To recognise the 20-year milestone in 2019, a large mural showcasing the Stadium’s most memorable moments over 20 years has been posted on the front windows of ANZ Stadium. Keep an eye out for it at upcoming events.

It includes Cathy Freeman’s dash that unified the nation, the John Aloisi penalty shootout heart-stopper that broke the Socceroos’ 32-year World Cup hoodoo, the exhilaration and despair of the 2003 Rugby World Cup final, the Sharks and the Rabbitohs winning breakthrough NRL titles, and so many legends created in the heat of battle in Grand Finals, Origin showdowns, Bledisloe Cup Test matches and Socceroos internationals.

Global music acts such as U2, AC/DC, Adele and Ed Sheeran are also recognised on the artwork.