The P.A. People looks back on ceremonies role at 18th Asian Games 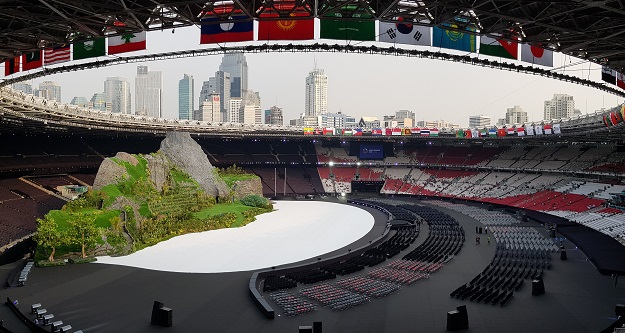 Leading audio-visual company The P. A. People has shared its experiences of its contribution to the recent Opening and Closing Ceremonies for the 18th Asian Games Jakarta Palembang in Indonesia.

Held on 18th August at Jakarta’s Gelora Bung Karno Stadium, 40,000 spectators were entertained by an Opening Ceremony that featured cultural performances and pyrotechnics on what is understood to be the largest scenic built for an opening ceremony; a 120 metre-long stage in the shape of a towering mountain with a waterfall and a simulated volcanic eruption.

Supplying the communications systems for its second Asian Games, this time in association with US- based production company, FiveCurrents, Sydney’s The P. A. People helped with the entertainment that welcomed Asia’s top athletes to Jakarta and Palembang.

The initial sequence of the Opening Ceremony showed a video of President Joko ‘Jokowi’ Widodo’s on his way to the opening ceremony. The President was seen to be stuck in traffic, but he got out of the car and took a motorcycle to get through the traffic.

On the way to the stadium, the President was seen to weave the motorbike through Jakarta’s small road and, as he reached the stadium he waved to the crowd, before then appearing in the VIP box.

The P.A. People Head of Department and Project Manager Campbell Waller commented “we were in Jakarta since early June, and the opening sequence of the show depicts a scene which is commonplace.

“The traffic is something that does take some getting used to”.

Jakarta also has a notoriously busy radio frequency (RF) environment and, with the stadium being in the heart of nine million people, RF was very busy and challenging.

With The P.A. People’s wealth of experience and RF filter design, the company worked with FiveCurrents and the local regulator to provide a high-quality solution with very limited frequency separation. The system design includes 24 half duplex base radios and 24 simplex base radios interfaced to the matrix intercom frame, along with 600 portables with a wide range of accessories 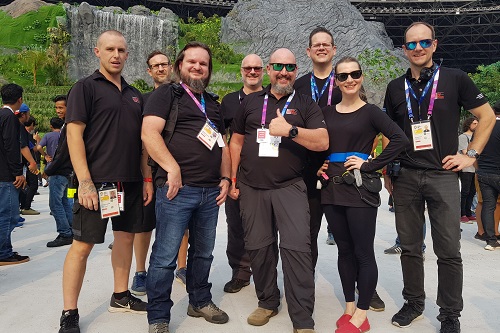 The P.A. People provided an extensive Clear-Com IP based wired communications system for the Ceremony. The system featured a pair of Eclipse HX Omega matrix frames with both native Dante and MADI connectivity, and around eighty V series lever and rotary Key Stations. The matrix system was supplemented with Clear-Com Helixnet digital partyline beltpacs for follow spots and mechanical operators in the ‘mountain’, and an integrated Clear-Com FreeSpeak II system to support the stage management team. The full duplex FreeSpeak system provides full stadium coverage, including all vomitories and selected back house areas, as well as coverage for an additional 15 packs in the rehearsal venue 500meters from the stadium

For this project (and for the Venue Intercom Systems at Pyeongchang earlier in this year), the team have been trailing the new V1.5 firmware release for the FreeSpeak II system. “The coverage in this environment is amazing” commented Campbell, “it is a great improvement”.

Another significant aspect of the system was the Cast In-Ear Monitor system. Given the RF environment a decision was taken early to use an out of (commercial) FM band solution. The P.A. People supplied 5 channels of transmitter 6,000 receivers, and 12,000 earpieces for the cast.

The P.A. People supplied a significant Event IT solution to assist the FiveCurrents team with the delivery of the event. The team supplied and deployed:

The P.A. People solution in Jakarta was rounded out with a 10 camera EyeCue CCTV system.

Nick Eltis, the Show’s Technical Producer added “the team from The P.A. People have again acquitted themselves well on a show that could not support all the bells and whistles. The team and system have been in integral part in assisting FiveCurrents deliver another spectacular Ceremony program.

“We look forward to working with them on another project soon.”